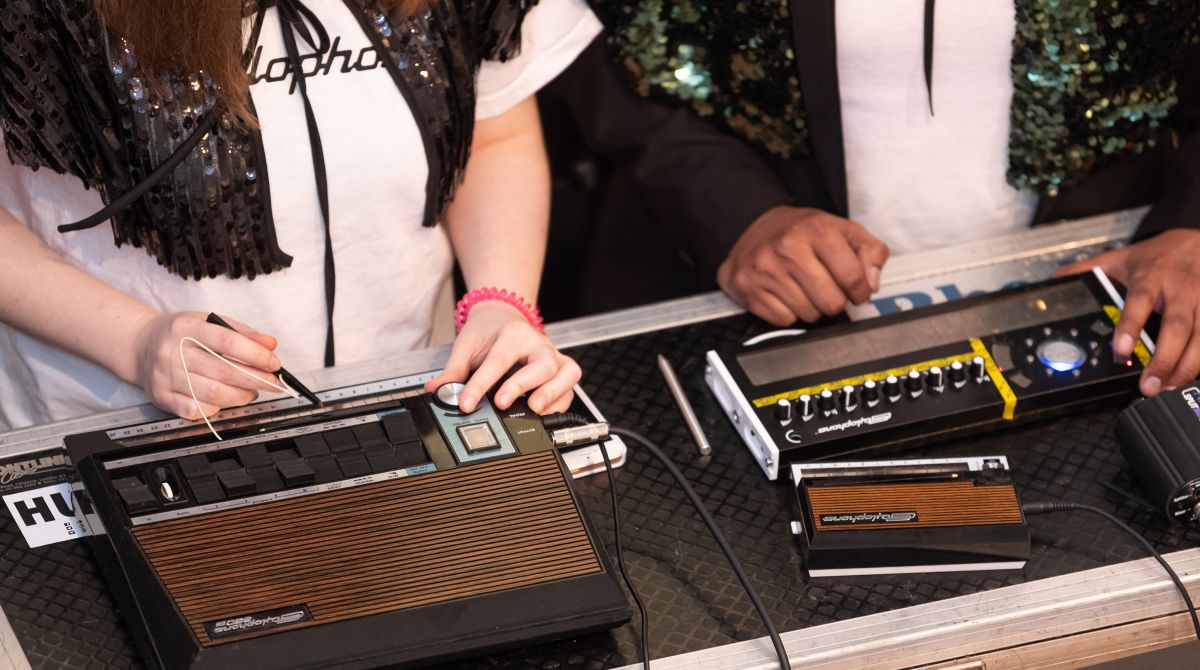 Kingston University's Stylophone Orchestra have created their version of David Bowie's classic track Space Oddity to mark the 50th anniversary of the track.

World renowned super producer Tony Visconti has lent his talents to Kingston University's Stylophone Orchestra for a unique rendition of David Bowie's classic Space Oddity, created from recordings of the much loved vintage analogue synthesizer. The session, held at the Music Department's Visconti Studio at the Kingston Hill campus, revealed new layers to the song, 50 years after its original release.

The Stylophone Orchestra, thought to be the first ensemble of its kind in the world, had created a surprisingly rich sound, aided by the studio's impressive acoustics which allowed the analogue tones to resonate in new ways, Visconti said."This version is a bit like Alice in Wonderland falling down the rabbit hole and going to the land of Stylophone where the creatures have a pen with a wire attached," he said. "It was a complex session - to get it right we had to be meticulous. If one person made even the slightest mistake we had to punch in again and, with nine people playing at the same time, you never quite knew what was going to happen."

The iconic producer, who has also worked with the likes of Marc Bolan, Thin Lizzy, Morrissey and Damon Albarn, was capitvated by the orchestra and the arrangement, written by Kingston University music academic and Bowie expert Dr Leah Kardos. In fact Visconti was so impressed by the orchestra and the arrangement, he has recruited them to be a part of his new album, due for release in 2020.

"The working title of the song is Politics. For the solo part, I originally envisioned a saxophone section but I got my Stylophone out and played it, knowing I was going to visit the studio shortly," he explained. "I sent the idea to Leah, she transcribed it and taught it to the students. The end result is quite remarkable and will definitely be going on the record, which will hopefully be released before the next American election."

Visconti has discovered one of the bonuses to working with students is the amount of willing helpers on hand to offer assistance and a new perspective on music. During his return to the studio named in his honour, he even took the time to hold a production masterclass, giving bespoke tips from his much vaunted career to the University's fledgling songwriters and producers.

"I love working with the students," he enthused. "In a professional studio there's one assistant in the room, whereas here I have 10 or 12 assistants all eager to help. "Sometimes the speed of my work surprises them and I explain I'm not rushing, if I work at a good speed, I get less exhausted and I've learned how to work that way. I break all the rules and they love that because we have a shared spirit."

The Stylophone Orchestra was created by Dr Kardos, who recruited members to take part after receiving a box of instruments from its makers Dubreq. "Working with someone of Tony Visconti's stature is really special for all of us and a great opportunity for the students," she said. "When we received the delivery from Dubreq, I blurted out that we should start a Stylophone Orchestra before I'd even really realised what I'd said. It's since become a reality and is, I believe, the only one of its kind."

Space Oddity was a natural choice for Dr Kardos, a diehard Bowie fan who is currently writing an expansive account of the recording of his final album, Blackstar. "It's a challenge for the students, but from challenges come opportunities to be creative and show ingenuity," she said. "The Stylophone is limited and sounds the way it sounds but, within those limitations, is the opportunity to do something really interesting."

The orchestra is made up of students and staff from across the University. While the majority of the players use the original Stylophone, the orchestra's palette of sounds has steadily increased since its inception. The players use an array of instrumentation on the Space Oddity recording, including nine Stylophones, a Gen-X and the first recorded performance of Dubreq's latest innovation, the Gen-R8. "We came to the studio and met Tony, bringing with us some very old Stylophone kit which has been added to the Visconti Studio's analogue instrument archive," Dubreq co-director Marcella Kavanagh explained. "The studio is beautiful and we were blown away by the music being made with the Stylophone. Supporting music education is a very important part of our philosophy. Most of our kit is inexpensive and accessible to everyone. You can set up an ensemble in a classroom." 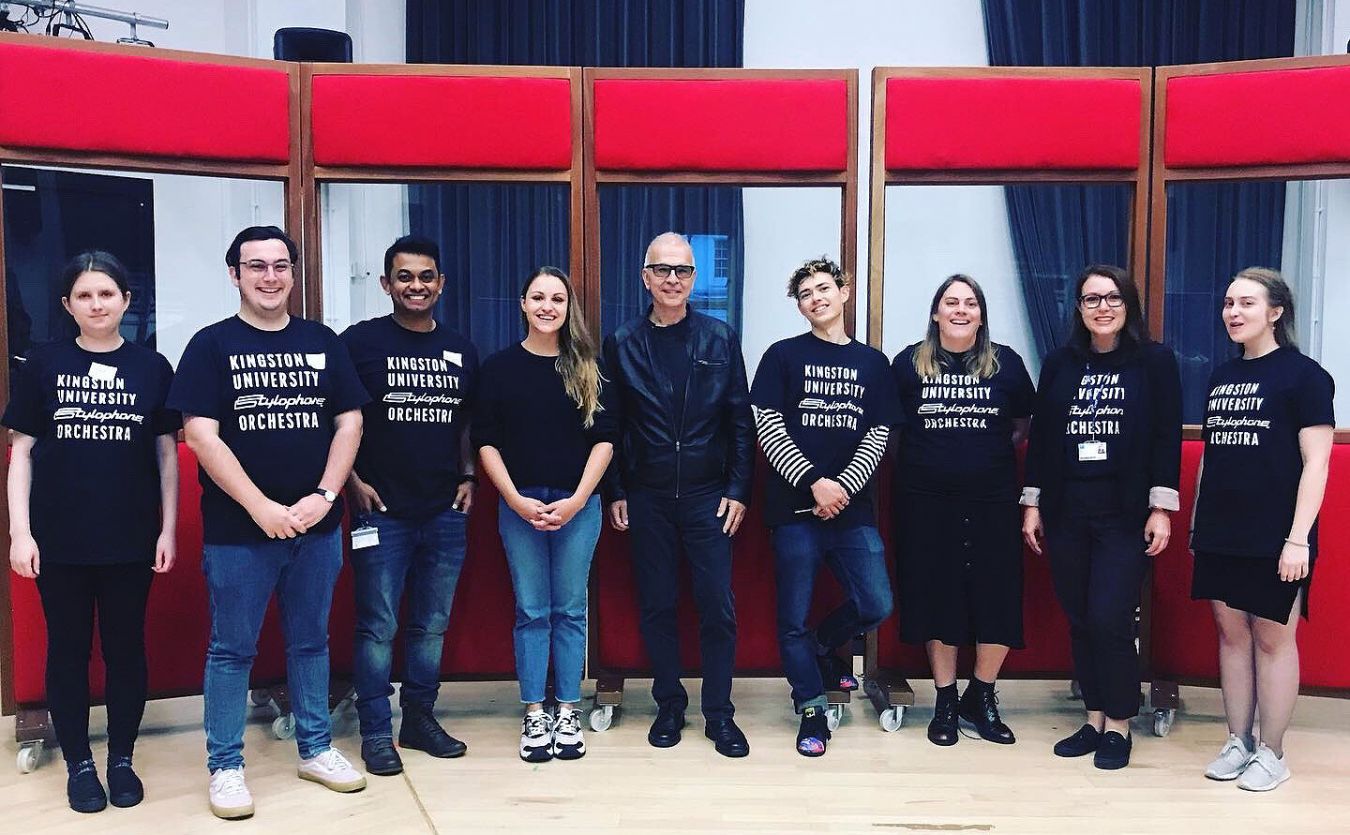 Tony Visconti with the Stylophone Orchestra.

Music student Ershad Alamgir had the daunting task of following in the footsteps of a musical legend when he was tasked with adding his vocals to the Space Oddity recording. Time constraints meant he was given just two takes to nail the track. "The Visconti Studio is always a very creative atmosphere to work in and Tony Visconti himself is amazing. Working with him is always a great learning experience and something I can talk about for the rest of my life," he said. "I came to Kingston University because of the studio and it has come full circle now with me recording this song."

The Stylophone Orchestra's next projects are yet to be decided but there are bound to be plenty more creative challenges ahead. Visconti thinks it should tackle Queen's Bohemian Rhapsody while also suggesting there are plenty more Bowie classics that could lend themselves to a Stylophone makeover.

Dr Kardos is also keen to mine a strain of early electronica that would be fitting for the studio's analogue tape machine and collection of vintage instruments, including a mellotron. "I want to attempt some Bjork, Kraftwerk, maybe some Vangelis and lots of classic electronica," she said. "I'm even tempted to take on Britney Spears' I'm a Slave for You. Whatever we do, I promise it won't be boring." 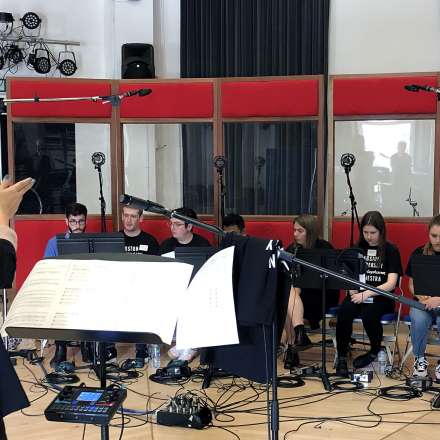 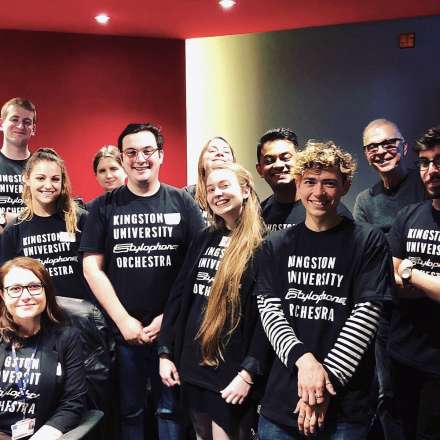 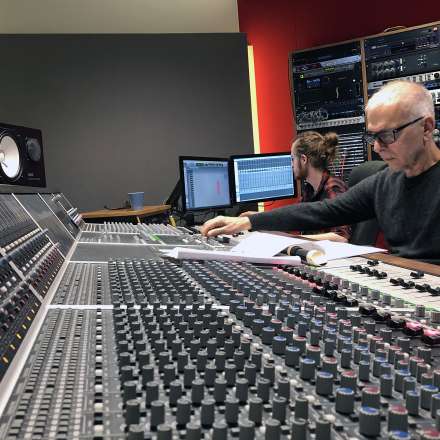 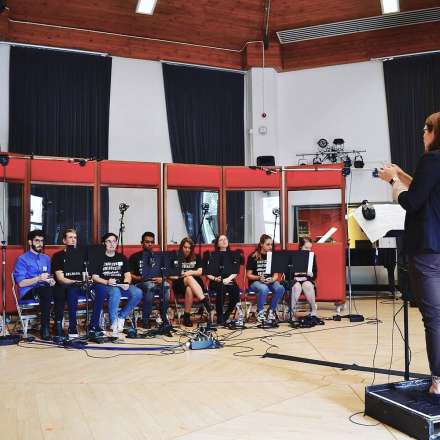 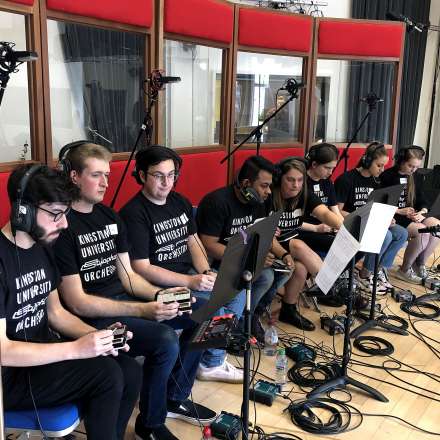 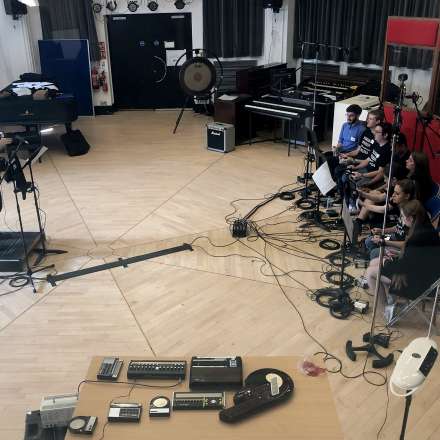 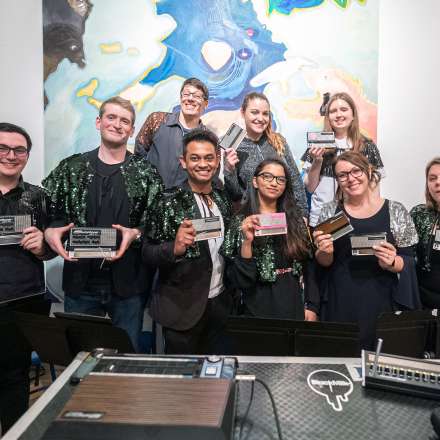 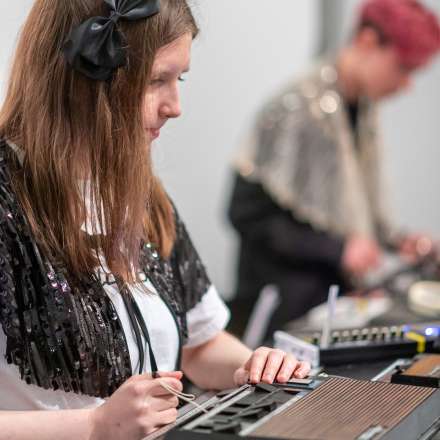