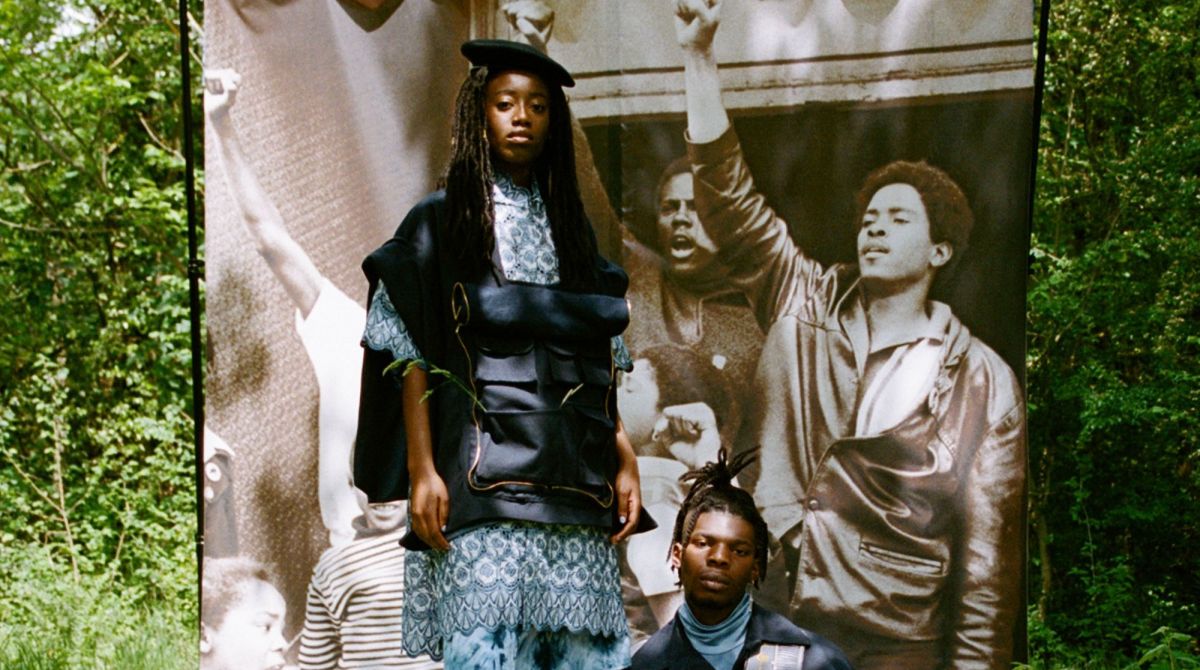 The spotlight was on a group of 25 designers who shared their work with an audience of influential fashion industry professionals and journalists via live web stream.

Kingston University students have a successful track record at Graduate Fashion Week, with many scooping major awards. Graduates from the BA (Hons) Fashion course – which was ranked number one in London in the Guardian University Guide 2021 and among the top 25 fashion schools in the world by Fashionista – have gone on to work for world-leading brands including Calvin Klein and Alexander McQueen, while other entrepreneurial students have achieved success with their own labels.

Among this year's cohort were Joy Julius, who has created a collection for men and women in response to the anti-SARS movement in Nigeria, a series of protests that took place last year calling for an end to police brutality by the nation's Special Anti-Robbery Squad. The movement sparked interest from around the world with the #endSARS hashtag trending on social media. Joy was crowned the winner of the Black Excellence Award in the Graduate Fashion Week 2021 Awards. The prize was new for this year and aims to provide visibility to Black graduate talent in the industry. Her collection was judged by an esteemed panel including award-winning designer Bianca Saunders, a fashion graduate from Kingston University. 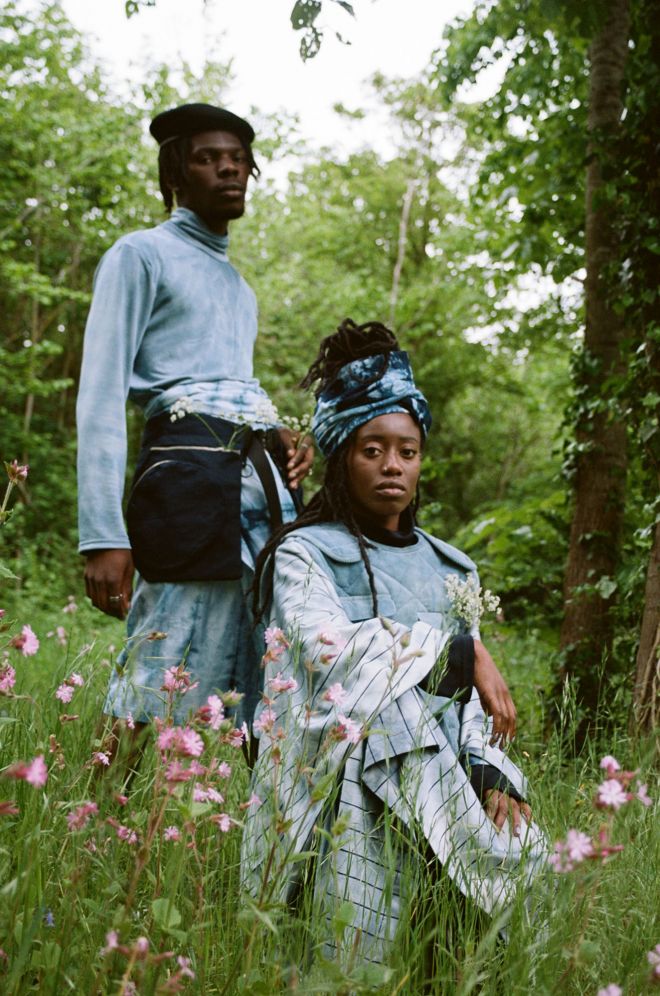 Joy Julius' collection blends traditional Nigerian clothing with military detailing - photo credit - Ivory CampbellJoy's six looks blend traditional clothing with military detailing using Nigerian menswear robes, called Agbada, as the foundation for her collection. In a bid to be more sustainable, she processed donated and deadstock fabrics to create Adire, which is a traditional Nigerian dyeing technique. One look features a blue military jacket made from repurposed brown corduroy which Joy sourced from her internship with designer Tommy Hilfiger, organised by the University.

As a Nigerian-Swiss national now residing in London, Joy said she felt emotionally invested in the anti-SARS protests as many of her family live in Nigeria. She wanted to use her collection to raise awareness. "I felt a bit powerless being in London and was looking for an outlet where I could express my frustrations and help in some way," she said. "Through my art, I wanted to create a new movement of people – like the Black Panther movement in the 70s against police brutality – that would protect civilians and empower individuals to be that barrier from the police."

Another woman who took on global issues is Mimi Simpson whose sustainable gender-fluid collection uses repurposed clothing and upholstery sourced from boutique charity shop Mary's Living and Giving in Teddington, south west London, and donations she received from the wider Kingston community. Mimi won the Considered Fashion Prize in the Graduate Fashion Week 2021 Awards for addressing sustainability and responsible design.

The 21 year old explained she wanted her collection to draw inspiration from the everyday life of the pandemic and to show that waste products can be made into high-end pieces. "A lot of the waste products I was given by the community were interior pieces including armchairs and curtains. As everyone was in their home so much because of the pandemic, I wanted my collection to resemble the surroundings we found ourselves in during that period but in a sophisticated way," she said. "There are few luxury brands that are re-using waste products. I wanted to show the raw edges of sustainability but also highlight that waste products can be repurposed into luxury clothing to deliver this to a new type of customer," she added. 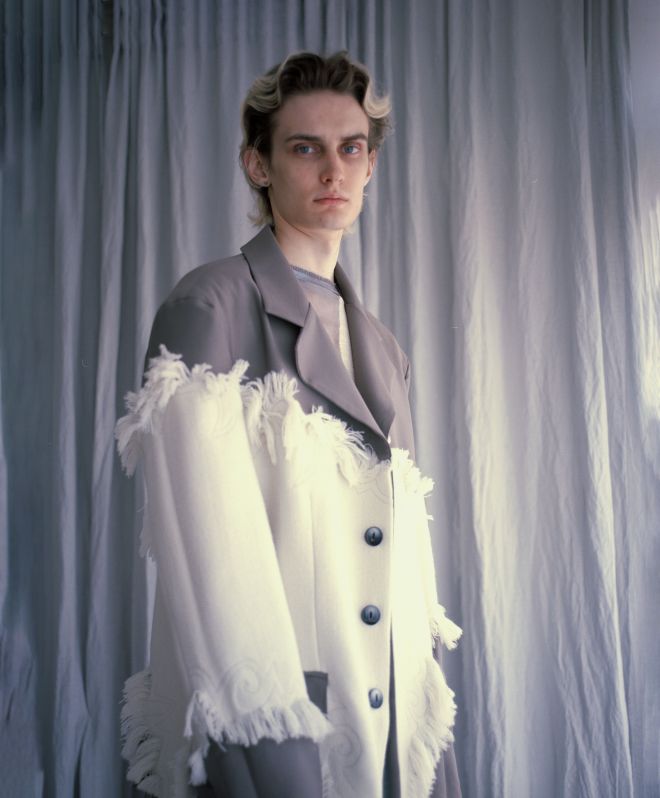 Mimi Simpson's gender-fluid collection features playful looks - photo credit - Niall HodsonOne of her looks features an oversized frayed jacket. Mimi explained challenging gender stereotypes was also the inspiration behind her collection. "I didn't want to put labels on the clothes as to whether they were for men, women or non-binary individuals," she said. "It was a challenge getting the silhouette to suit all genders, but it ended up bringing a new sense of style depending on the individual that was wearing it and often made the look more playful."

Another young designer who addressed gender stereotypes at Graduate Fashion Week is Rhiannon Owens. Her collection was inspired by the work of Ray Petri, a British fashion stylist and founder of Buffalo – a movement that challenged traditional and stereotypical ideas of men's dress. Meanwhile, Lucy Cutmore's collection explores the multiple layers and components to an individual identity by contrasting volume with restricted shapes.

BA (Hons) Fashion course leader David Frizzell praised the students on their collections. "Many of the students exhibiting at Graduate Fashion Week this year have embraced social and political issues and have made a conscious effort to use repurposed and recycled fabrics, which is something we emphasise at Kingston School of Art as part of a responsible design context," he said. "These talented new designers have produced beautifully crafted six look collections whilst living and working under pandemic restrictions. We are excited and confident about what they will do next."