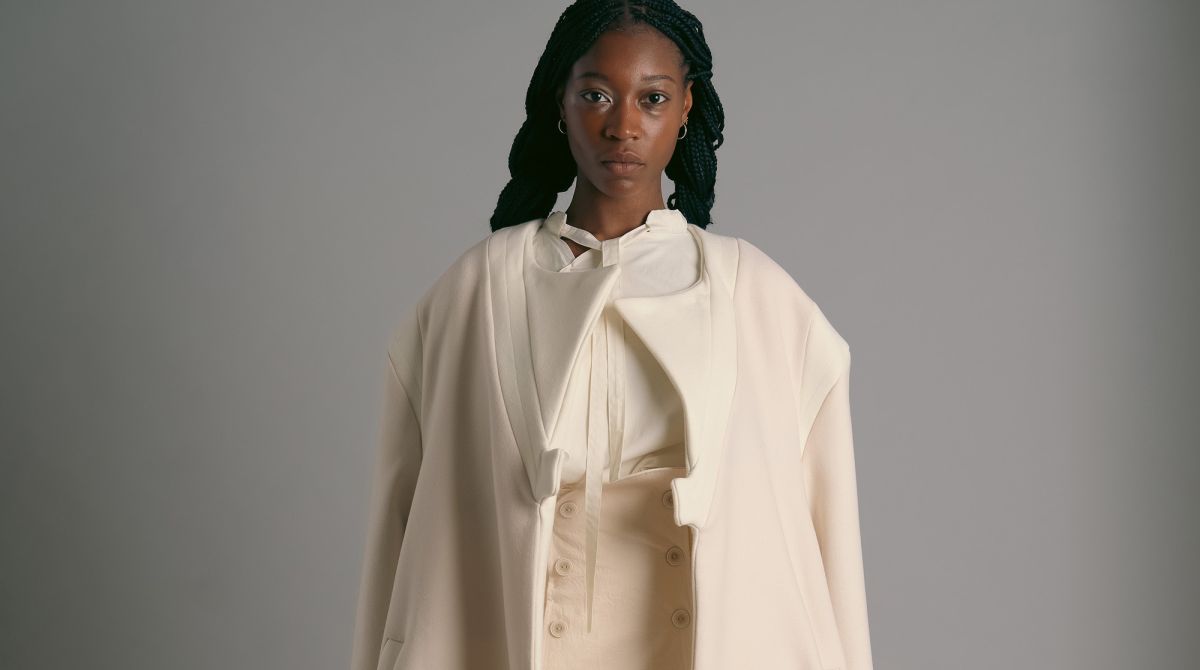 A Kingston School of Art student has been crowned the winner of the FACE Excellence Prize at Graduate Fashion Week, for her final-year collection which is inspired by her cultural heritage.

The accolade which recognises Black, Brown and minoritised excellence and creativity, was awarded to a Kingston School of Art student for the second year in a row, following Joy Julius' success. The award was launched last year in support of Fashion Academics Creating Equality (FACE), a group founded in 2020 to challenge the fashion industry to be more inclusive, unified and equal.

Each look features up to five garments made from organic materials including linen, wool and cotton. Meerim explained that the layering effect – ranging from heavy wool coats to sheer dresses – was inspired by her country's nomadic lifestyle. 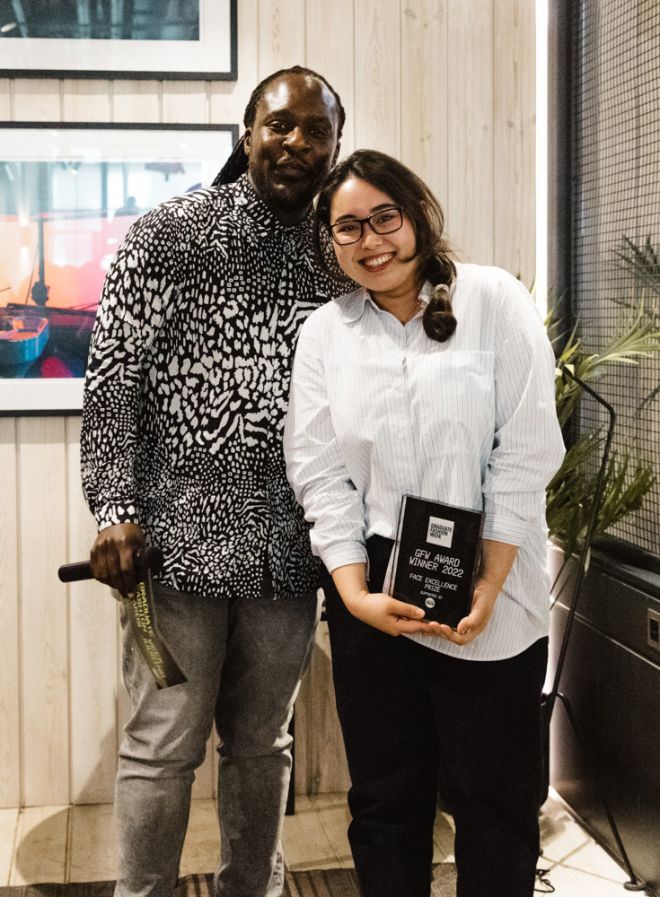 Meerim collecting the FACE Excellence Prize at Graduate Fashion Week."In Kyrgyzstan, there are still people who live a semi-nomadic way of life in the mountains and they wear multiple layers because of the changing weather," she said. "I wanted to mirror this by creating a modern, comfortable and transformable collection that allows people to have more styling options and to be prepared for any type of weather."

The 22 year old was also inspired by traditional Kyrgyzstan clothing during the early 20th Century. "Kyrgyzstan was one of 15 countries that were part of the USSR (Union of Soviet Socialist Republics), but our relationship with Russia started earlier than that," she explained. "I looked at traditional clothing from around 1910 to 1930 and how it was heavily influenced by European style."

Meerim's collection, called Name My Land – Jer, with Jer translating to land from Kyrgyz, conveys her understanding of human relationships. "Whatever our race, culture or religion, we are all nomads, to some degree, who are in constant movement. We are people who share one big house, a land where we should all feel welcomed, and a place that we should all feel at home," she said.

Visiting professor Caryn Franklin MBE, herself a Kingston University graduate and member of FACE, commended Meerim on her success. "The level of craft and skill combined with Meerim’s storytelling and cultural celebration of Kyrgyzstan is something our FACE judges were absolutely thrilled by," she said. "Her collection is testament to the high level of technical achievement of all Kingston students and the encouragement they receive to explore personal dialogues. Meerim has done her institution proud and I look forward to following her journey."

Another graduating designer who has explored her heritage through her work is Zhanna Mosklayova. Her collection was shortlisted for the Fashion Innovation Award at Graduate Fashion Week, which recognises a student that has illustrated ground-breaking thinking.

Her womenswear collection called Complex Divorce references her dual Ukrainian and Russian heritage, as she set out on a journey of self-discovery to find out more about her family history.

"It's challenging having a parent from each country and I wanted to use my collection to improve my understanding of the similarities and differences between the two countries," Zhanna explained. "I started by looking at how Ukraine and neighbouring countries were trying to build their identities after the collapse of the Soviet Union."

Her garments feature abstract shapes and structures which she created by experimenting with metalwork. The inspiration behind the silhouettes came from photographers whose work depicts post-Soviet landscapes. "I looked at Alexander Bonder's photos of abandoned Soviet towns and a book called Soviet Bus Stops, by Christopher Herwig. I was really interested to see how I could incorporate these striking shapes into clothing," she said.

After the outbreak of war earlier this year, Zhanna explained her collection identified more intensely with her Ukrainian roots. She took further inspiration from Ukrainian photographers Synchrodogs and their portfolio, Ukraina, which provides a visual portrait of everyday life in Ukraine before the war.

"I wanted to find a way of paying homage to Ukrainian culture through my work, which has largely been overshadowed by the war," she said. "I also painted flags on the back of the shoes, one yellow and one blue, in honour of Ukraine."

The jersey fabric featured in many of her looks was inspired by the Adidas torsion shoe - a popular item of clothing during the Soviet Union.

"It was a product that my father references as desirable growing up in Russia. Western consumer goods were nearly non-existent, and the torsion shoe became popular through the black market," she explained. "I was inspired by the torsion shoe to use jersey fabric because of their similar quality. The tautness of both materials is also quite symbolic of the tension between all the Soviet countries."

Amelia Dyer took home the Zandra Rhodes Fashion Textiles Award for her knitwear collection which features ergonomic shapes printed on fabric and Krya Ellis Edwards was named the winner of the Fashion Illustration Award for her Moulin Rouge inspired garments. 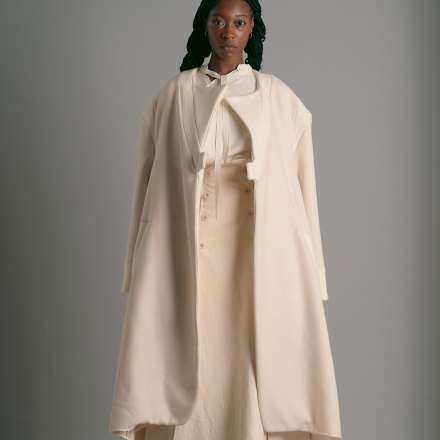 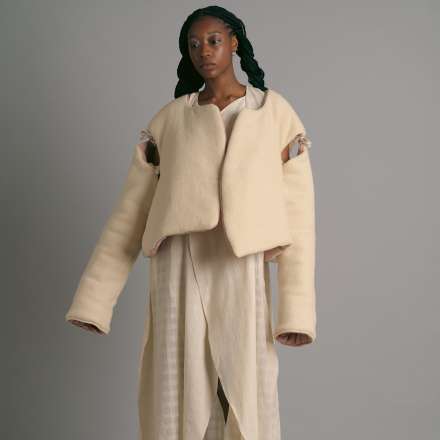 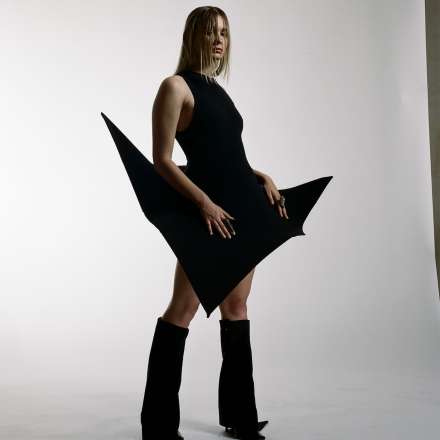 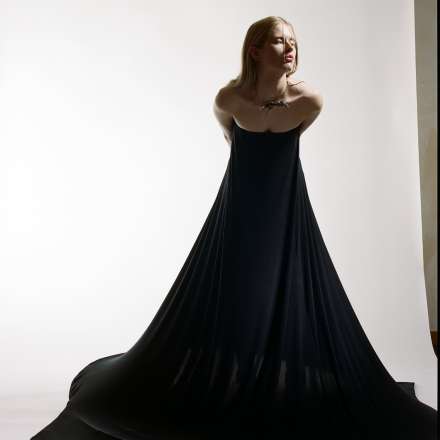 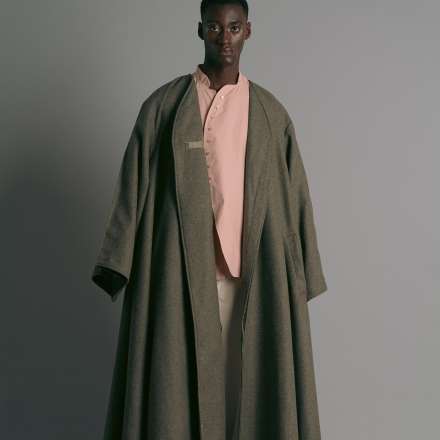 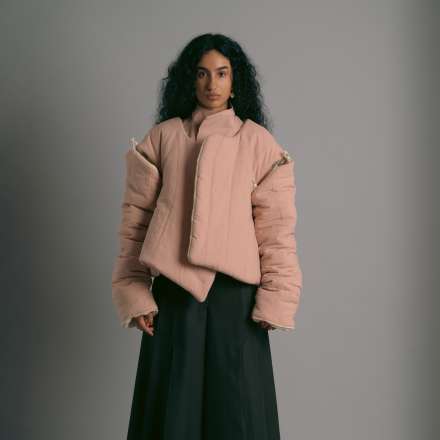 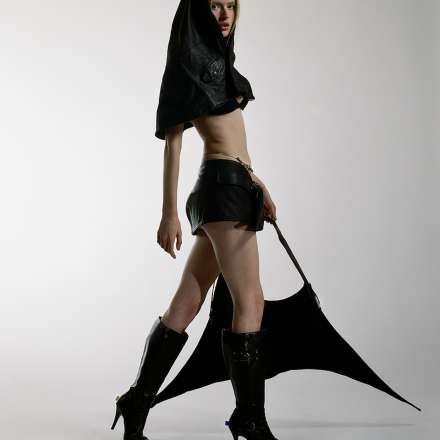 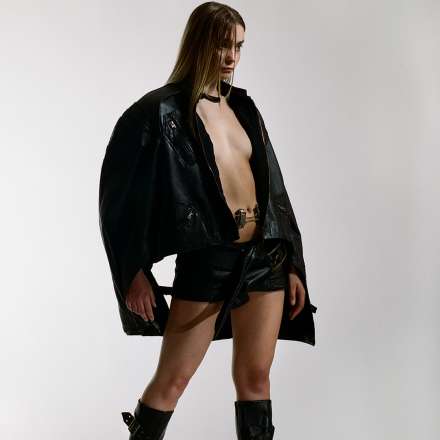