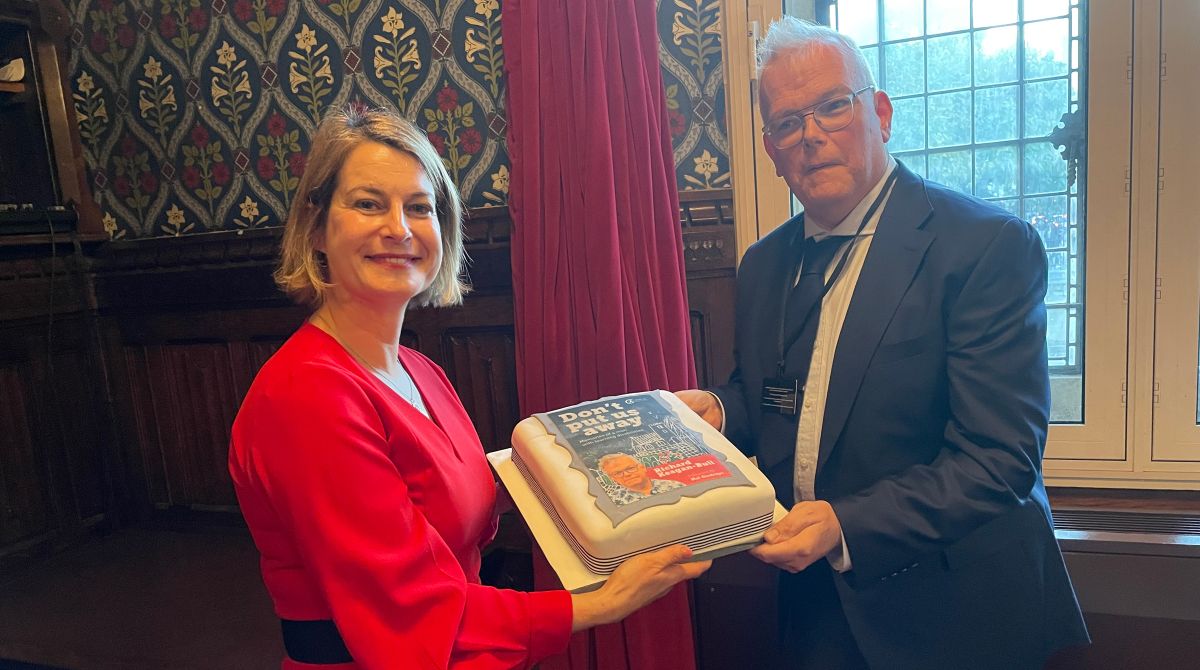 Assistant Researcher at Kingston University, Richard Keagan-Bull, celebrated the publication of his autobiography at the Houses of Parliament and was joined by his local MP, Helen Hayes (left)

A Kingston University research assistant has written his life story about growing up with learning disabilities, the challenges he has faced throughout his life and how he is working to change perceptions, which was celebrated during an event at the Houses of Parliament.

Richard Keagan-Bull, who was named one of the top 100 most influential disabled people in the United Kingdom by the Shaw Trust charity in 2021, has published Don't Put Us Away: Memories of a Man with Learning Disabilities. It is a first-hand account of what it was like growing up with learning disabilities in the 1970s. He dictated his autobiography to his friend Hazel Bradley, who wrote it down exactly as he speaks which, despite not always being grammatically correct, gives a unique authenticity and power to his story.

An event to celebrate the release of the book was held at the Houses of Parliament and was hosted by Mr Keagan-Bull's local MP for Dulwich and West Norwood, Helen Hayes, who said his story was inspirational. "It made me laugh and cry. It has such a powerful message that all of us who are in parliament should really be thinking about. Everybody working with people with a learning disability should read the book – it teaches us how to be better people," she said.

Published by Critical Publishing, the autobiography has a foreword from British actor, comedian and television presenter Mel Giedroyc, who described it as both moving and funny. "Richard allows the reader to see the world through the lens of a person with a learning disability. He speaks so powerfully about the experiences of disabled people and the importance of creating a society where everyone is valued, cherished and supported," she said. 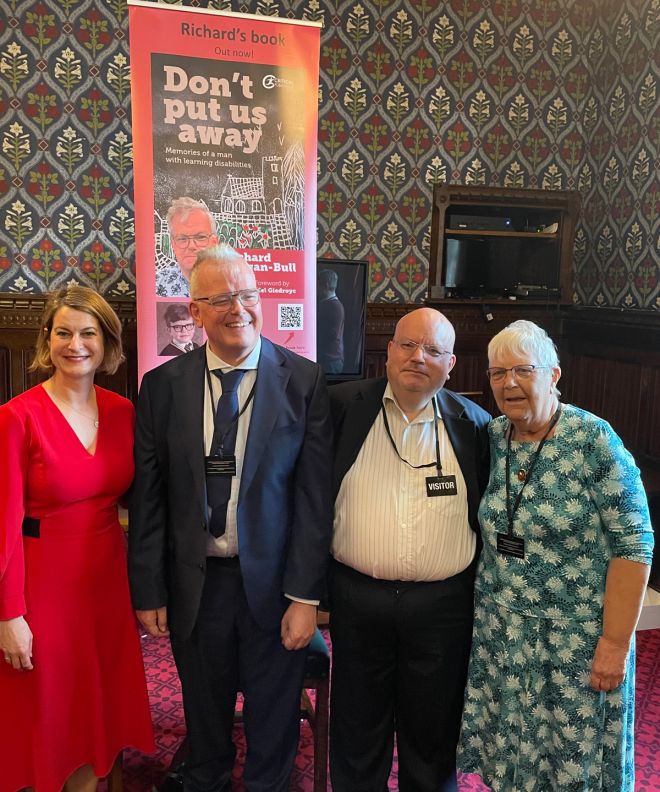 Richard Keagan-Bull (second from left) was joined at the Houses of Parliament by his local MP Helen Hayes (far left), his brother Philip (second from right) and his mother (far right).

Mr Keagan-Bull shares his experiences of growing up during a time when people with learning disabilities were widely ridiculed and judged. Astonishingly, his mother was told he would never amount to anything shortly after his birth. His secondary school headmaster was also dismissive of his life prospects and threw his schoolwork out of a window.

The newly-published author, who took part in Kingston University and St George's, University of London's pioneering programme helping people with learning disabilities become researchers, reflected on how those with complex needs have increasingly been given a voice over the last couple of decades. He also stressed the importance of finding your place in the world, even when it is not always welcoming, and feeling a part of a community – which could be a workplace, a church or a wide circle of friends.

"My message to the wider world is that we should accept people for who they are. It doesn't matter your background, ethnicity, sexual orientation or whether you can or cannot speak – we shouldn't be giving people labels. That's what I really wanted to get across in my book, for people to understand the challenges someone with learning disabilities faces and to show that we are people, just like everyone else," Mr Keagan-Bull said.

Leading learning disability and palliative care expert at Kingston University, Professor Irene Tuffrey-Wijne, who manages Mr Keagan-Bull and led the research programme he took part in, praised her colleague for defying his critics throughout his life. "Richard's headmaster told him couldn't be taught and now Richard is teaching students at a university. To hear his incredible journey in his own voice and through his own eyes is so moving and powerful – everyone needs to know Richard's story," she said.

A launch event and book signing is taking place at St George's, University of London on Monday 14 November from 6pm.Tickets are free and can be booked online.