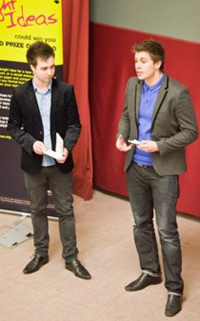 2011's Bright Ideas competition for entrepreneurial students is the biggest yet.

An innovative idea to help people in developing countries get spectacles was among the 23 prize winners at the 2011 WestFocus Bright Ideas competition for entrepreneurial students. The competition is in its seventh year, and is open to students at seven universities in London*.

Louis Mech from Royal Holloway University of London has set up a social enterprise to donate self-adjustable spectacles to developing countries. "Often actually getting hold of a pair of glasses isn't a problem in these countries, but there's a great shortage of optometrists so people don't know exactly what kind of glasses they need," he said. His company's 'buy one, give one' sales pitch for trendy sunglasses includes the donation of a pair of glasses for every pair sold.

This year, there were 170 entries involving about 290 students, who could enter individually or in teams. Many students entered as part of their degree programmes, while others are involved in entrepreneurs' societies or enterprise mentoring schemes. Students ranged from foundation degree to PhD level and crossed every discipline.

Awards were presented on Tuesday 15 February at a ceremony at the University of Westminster. First prize winners received £1,000 and the 15 runners up got £250 to help them further their ideas.

Martha Mador, Head of Enterprise Education at Kingston University and manager of the WestFocus Entrepreneurship Centre said: "Each year we get more entries, and the ideas become better and more diverse. They are often demanding and challenging ideas addressing genuine needs."

The audience also heard from two guest speakers. Simon Hulme, Visiting Entrepreneur at Kingston University spoke about some of the challenges, joys, and opportunities he had encountered through building and selling two businesses. Lars Lindstedt from Microsoft identified some of the needs which need to be addressed by entrepreneurs, and provided access to free resources which Microsoft provides for student entrepreneurs.

For the first time this year, a special category of science prizes were offered by the Science, Technology, Engineering and Maths University Enterprise Network (STEM UEN), sponsored by South East England Development Agency (SEEDA), the National Council of Graduate Entrepreneurship (NCGE), Microsoft and BAE Systems and which includes an additional two universities in the south east of England: Portsmouth and Surrey. The first prize in the science category was won by Sean Larsen, from University of Portsmouth. Sean is building a low-cost helicopter cockpit simulator for trainee pilots.

Luka Blackman-Gibbs, Royal Holloway University of London.
Luka's idea is for a skills exchange platform for students. It would encourage, for example, language learning between individuals.
Sarah Zaiden, Kingston University
Sarah has devised a software program based on the characteristics of superheroes which young people can use to understand these concepts.
Jason Rees and Alex Harris, Kingston University
Jason and Alex are designing a website to help students in London find accommodation.
Louis Mech, Royal Holloway University of London
Louis is promoting a social enterprise aimed at encouraging opticians to send self-adjustable spectacles to developing countries.
Mayra Cupples, Kingston University
Mayra is working on a 'last minute' website that would offer surplus training places to potential customers at cut prices.
Madeleine Williams Habberjam, Kingston University
Madeleine wants to offer interactive workshops for primary schoolchildren to teach them the elements of politics.
Helen Anderson, St George's University of London
Helen is developing a vibrating alarm that hospital patients could use to alert nurses, instead of an intrusive buzzer. She won the 'best idea in health and social care' award.
Sean Larsen, University of Portsmouth
Sean is building a low-cost helicopter cockpit simulator that trainee pilots could use to test their knowledge of emergency procedures. He won the special award given by STEM UEN (Science, Technology, Engineering, Maths University Entrepreneurs network) which was also open for entries from two universities outside the WestFocus group.