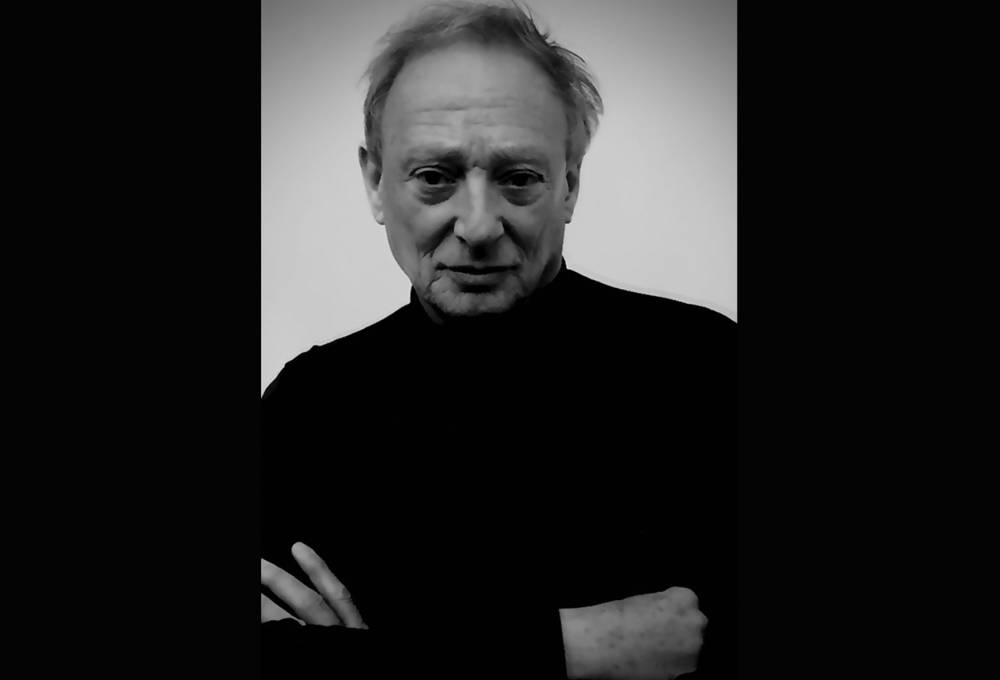 Professor of Film at KSA incorporating contemporary philosophical perspectives. Previously Professor of Film at University of the Arts London (1997-2012). Additionally has regularly been a visiting Professor to institutions across Europe, the United States, China and India. Subjects are drawn from collaborations in Contemporary Philosophy, Art/Science, Fine Art and International Cinema.

Produced and directed over fifty motion picture works including major international feature films which have had significant worldwide distribution. These feature films have been selected for category 'A' List festivals including Cannes, Berlin, San Sebastian, Rio de Janeiro, Moscow, Dehli and New York.  The films have won many international prizes and has been awarded the Prize for Outstanding Work in Art and Science, Beijing.

Honoree of the American Film Institute, The Art Film Institute Moscow and the Kanatica Film Directors Association of India. Continue working in new directions in both feature film and fine art along with series of documentaries. and other research vehicles.

"As a research professor teaching students is of paramount importance to me. The passing on of contemporary knowledge, gained through research underscored by my own ongoing creative encounters is a professorial duty. Engagement with students is a two way exchange being both interactive  and experimental with the intention of helping students towards their 'integration', 'maturation' and their own uniquely individual approaches to creative work".

MA/BA Lecture series title... 'GHOSTS, CINEMA & ARTISTIC PRACTICE' ... a series of twelve 3 hour lectures with comprehensive projection material. Followed by group discussions. The lecture series is an on-going investigation into the prevailing cultural climate. The lectures are adapted to incorporate students concerns of the moment. We explore and show complex means of production and the contradictions and resistances these bring up.

Additionally tutorials and seminars based around this lecture series and arising from the students' own productions.

Placement opportunities when available and suitable for advanced students.

My research has included collaborations with CERN (Geneva), SLAC (Stanford University, California), College International de Philosophie (Paris), MoMA (PS1, New York), MoMA (San Francisco), Museum of Contemporary Art (Beijing) amongst others. Each of the projects that I engage in always explores and questions developing means of production, the context in which these productions take place and new directions in dramatic transference.The research element of my work always requires engagement with original ideas and processes, often in collaboration with other disciplines in search for new synthesis. In advancing these projects, screenplays and visual sketches go through many stages. A hit rate of approximately 1 in 2 of the screenplays finally go into production. Discarded elements can often find their way into other projects in what is a process of re-integration and revision. This may indeed involve a change of medium and approach.I find that work that is carried out with intensity and authentic research is rarely wasted. Something always happens when we loose ourselves honestly, energetically, in the work.

Selected filmography from over 50 films and motion picture works:

The Immortal Mortal (currently in production)

The Philosopher's Hamlet (2018-2020 currently in post-production)

Being and Doing (1975-80) With Performance Artist Stuart Brisley

Correspondence and 3 works with Joseph Beuys 1973 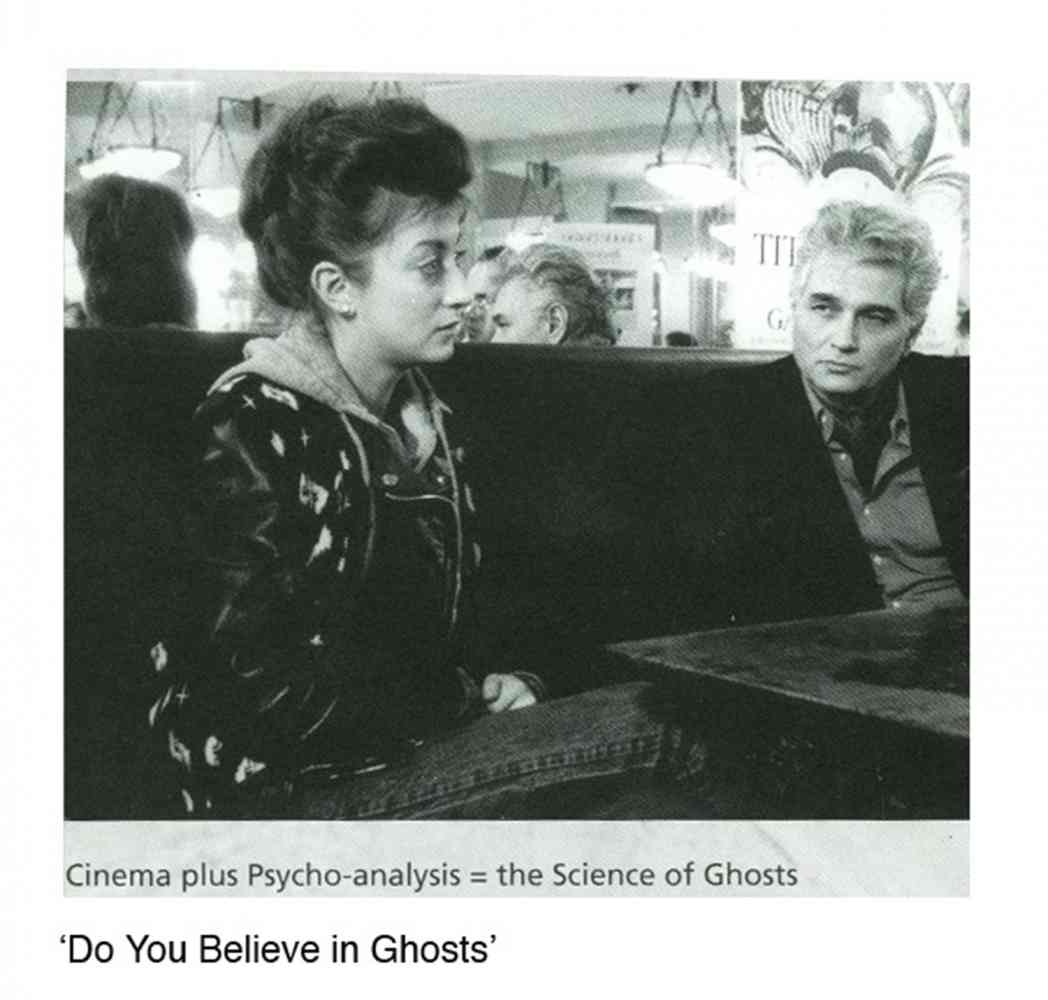 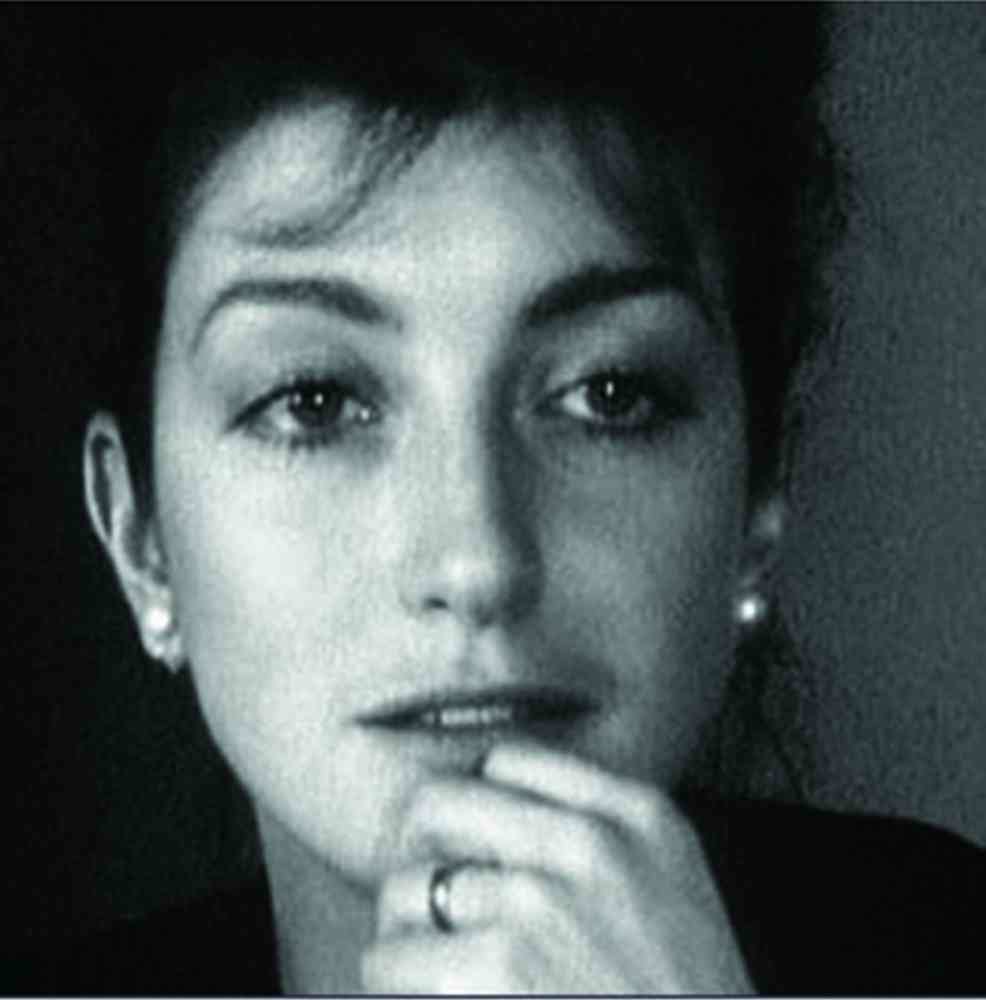 From Ghost Dance: Questions that may be more than questions.
French actor Pascale Ogier facing Jacques Derrida with a philosophical question about 'Ghosts' 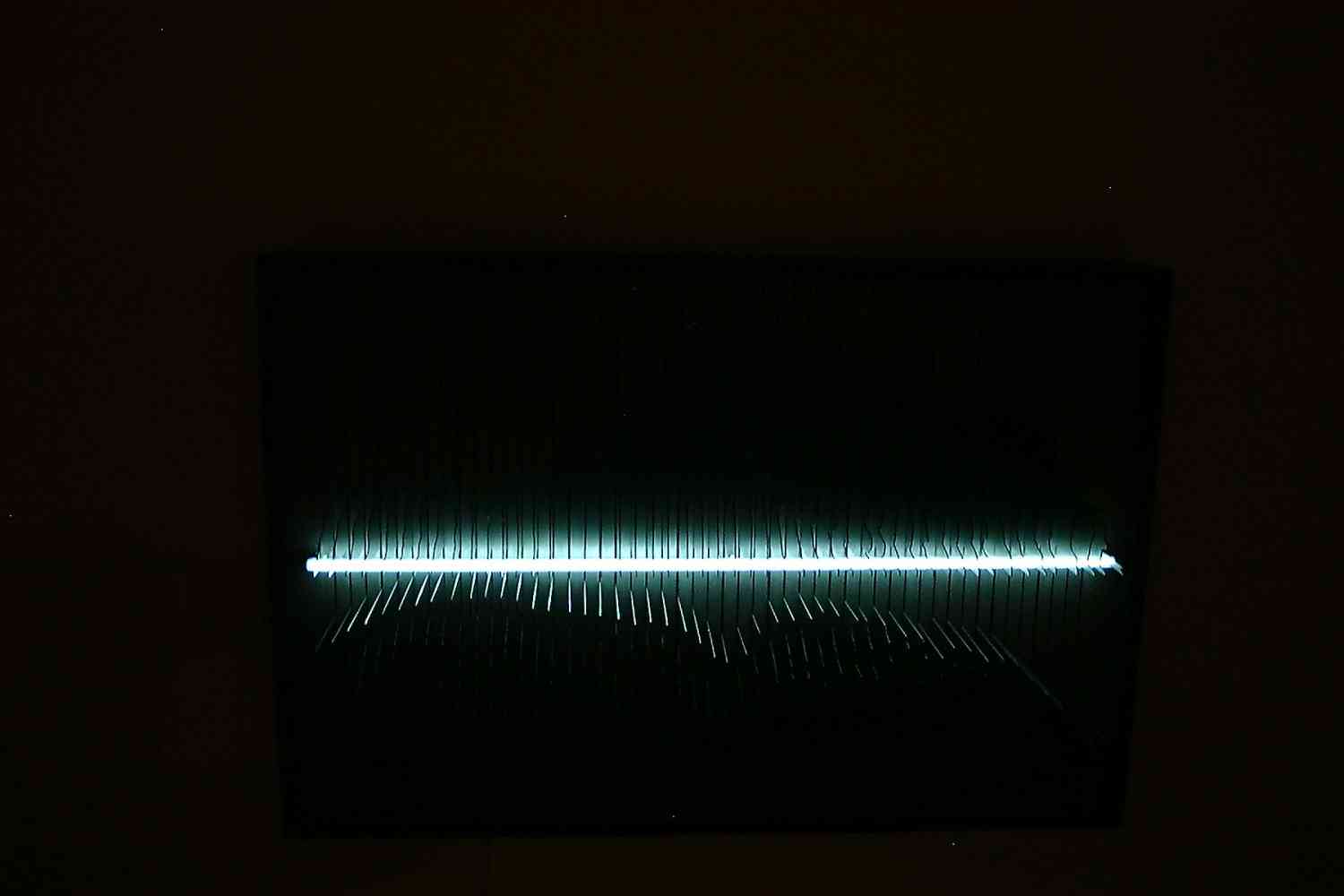 'Shadows and Errors': - Art Work:
Light/steel/reflections/motion/sequence. A work constructed in the prototype engineering workshop at CERN incorporating concepts in contemporary physics. Research background with theorists and experimentalists at CERN 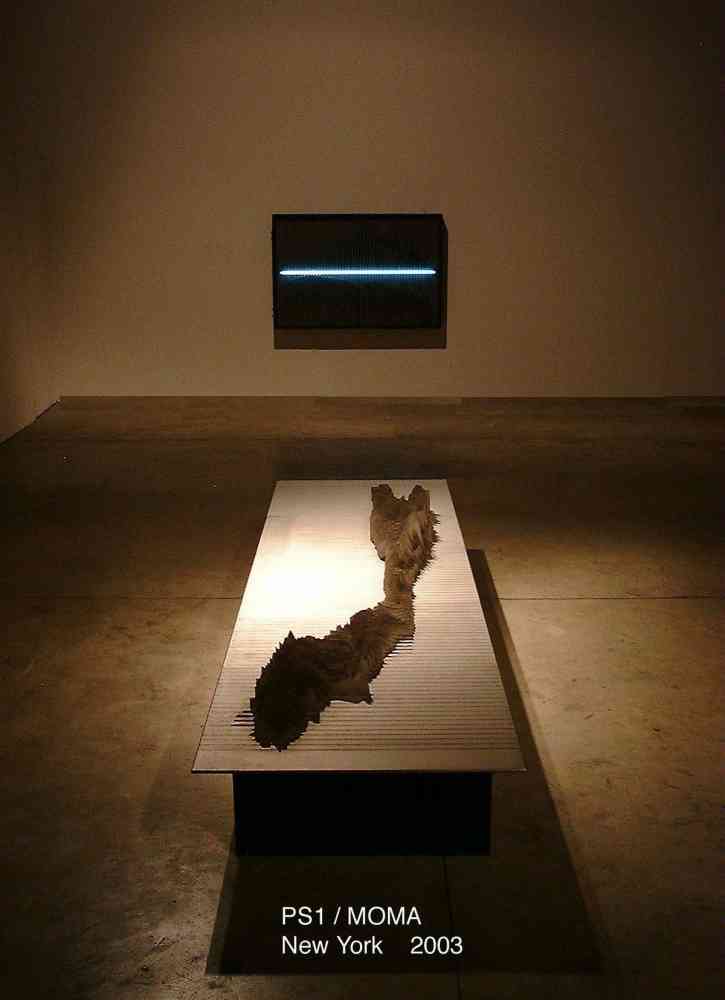 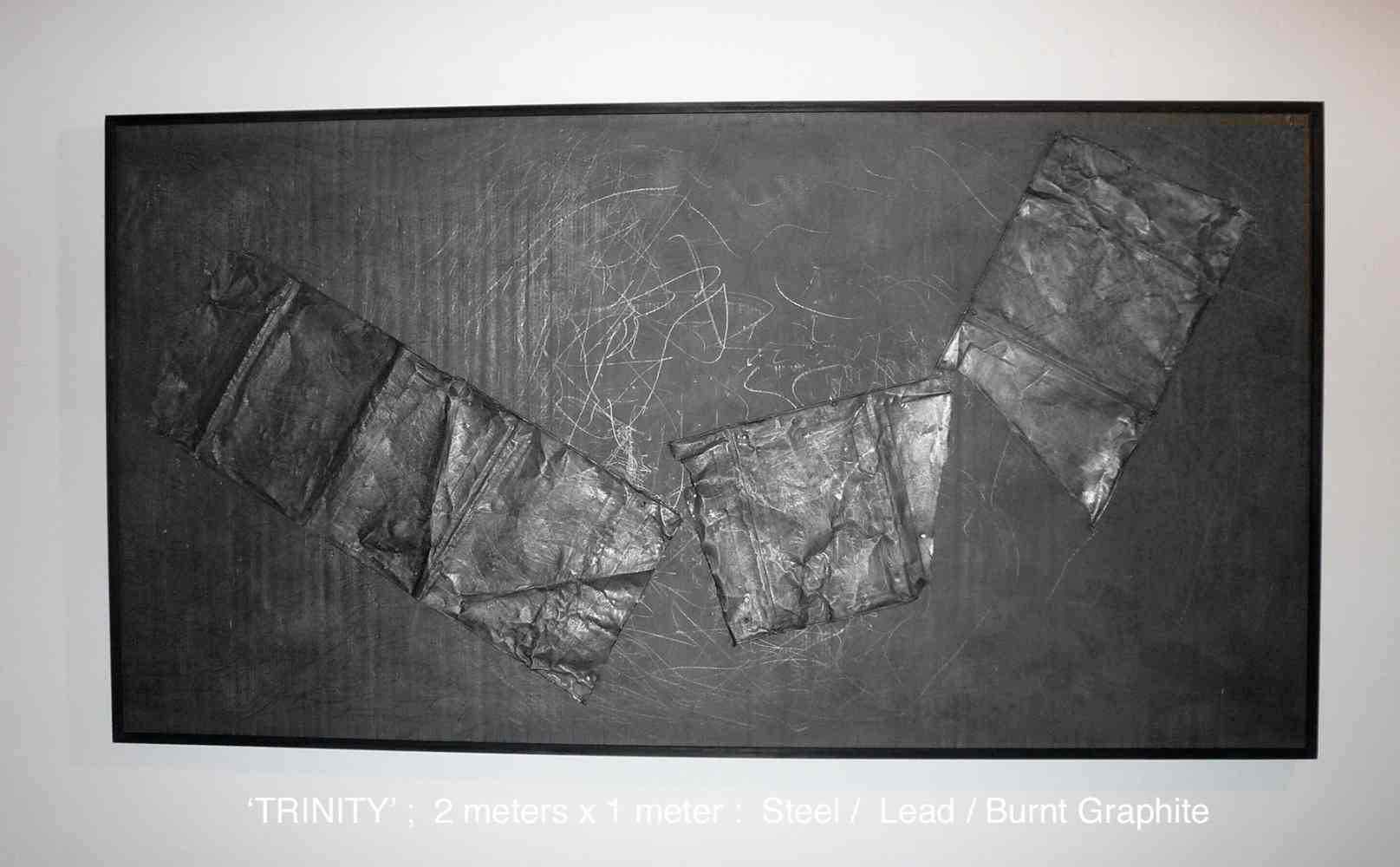 'Trinity': Art Work. One of a series of works exhibited on themes of 'Line, Position and Surface' in high energy physics.
Exhibited as part of 'Art+Cinema=Dark Energy' Cascais Portugal. Steel: Wood, Lead 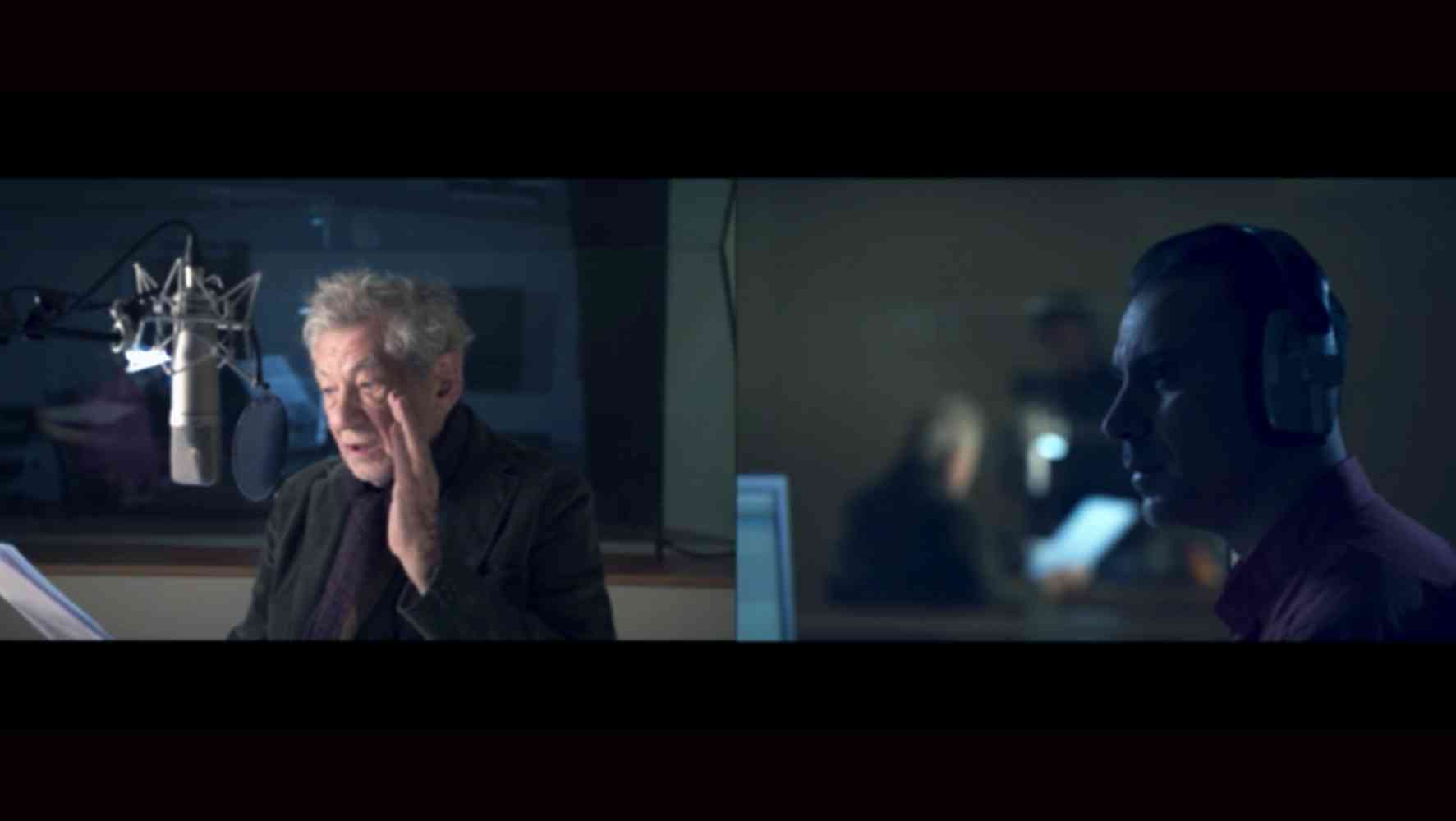 'The Father as 'Spectre': Two Hamlets meet: Feature Film in Production
Ian McKellen plays the 'Ghost': Ben Turner plays Hamlet: Set in a recording studio this double screen sequence was shot using two parallel cameras and incorporated the 'resistances' generated by the sound equipment. Specific to digital developments in film. In a way that Shakespeare or the theatre could not envisage or produce. 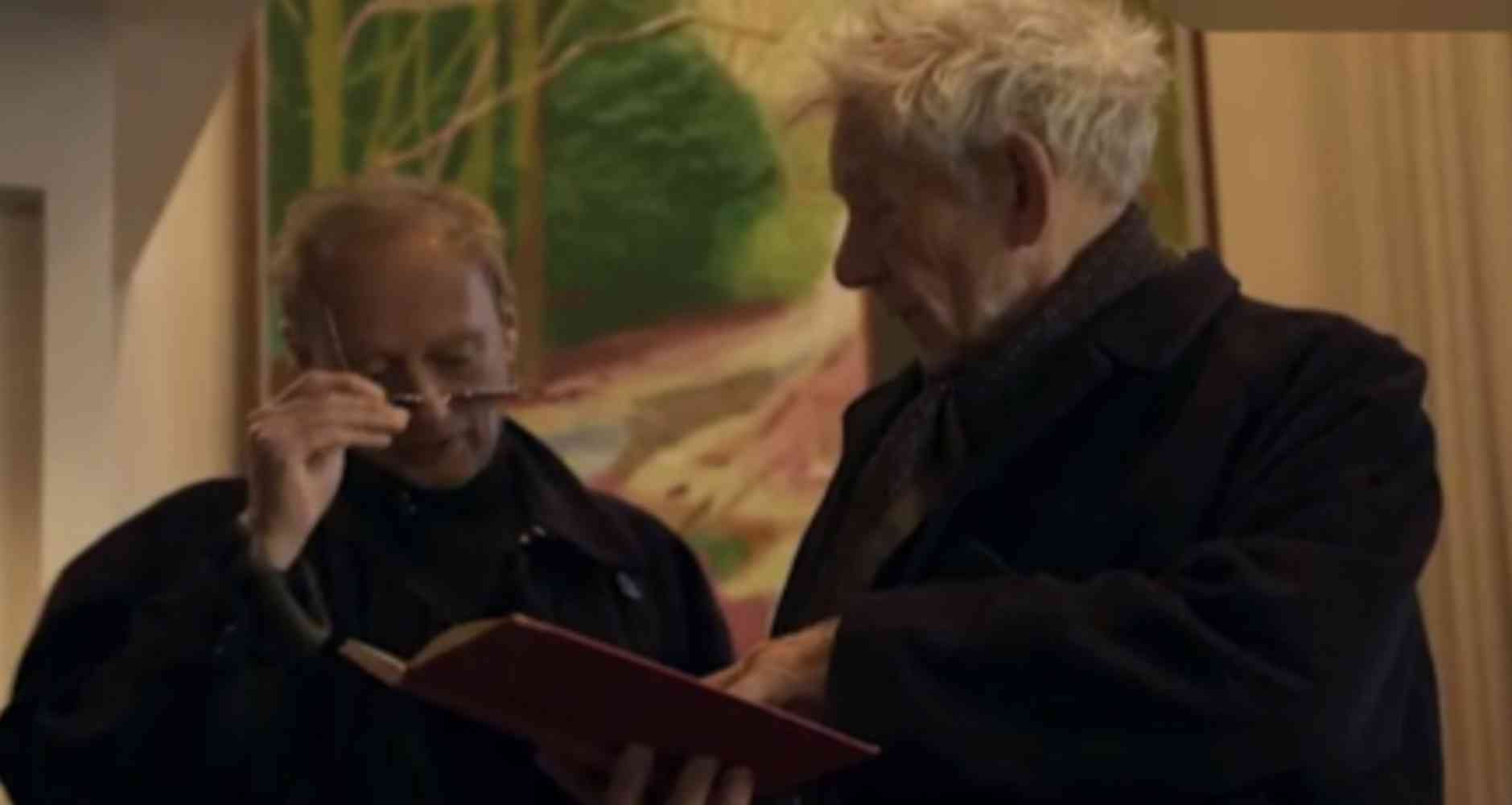 'Who was Hamlet?' Discussing the pre-history of Shakespeare's character: Research
Ian McKellen with Ken McMullen 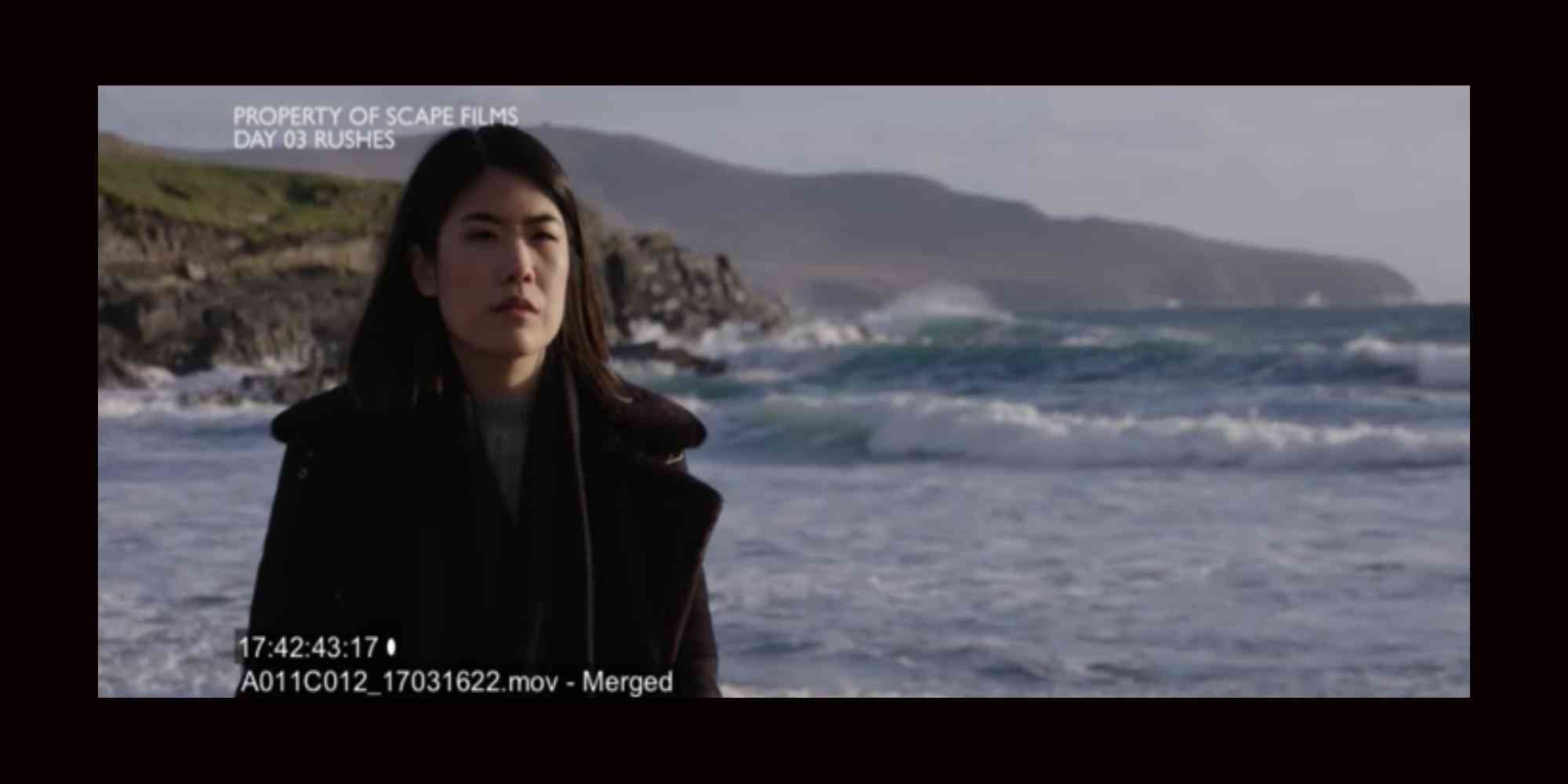 'Pirates' Exploring missing scenes in deconstructions of Hamlet
Elene Ny (Sing) plays a pirate in Shakespeare's missing scene when Hamlet returns to Denmark. Ah!!! Or does he? With pirates like this why would he? 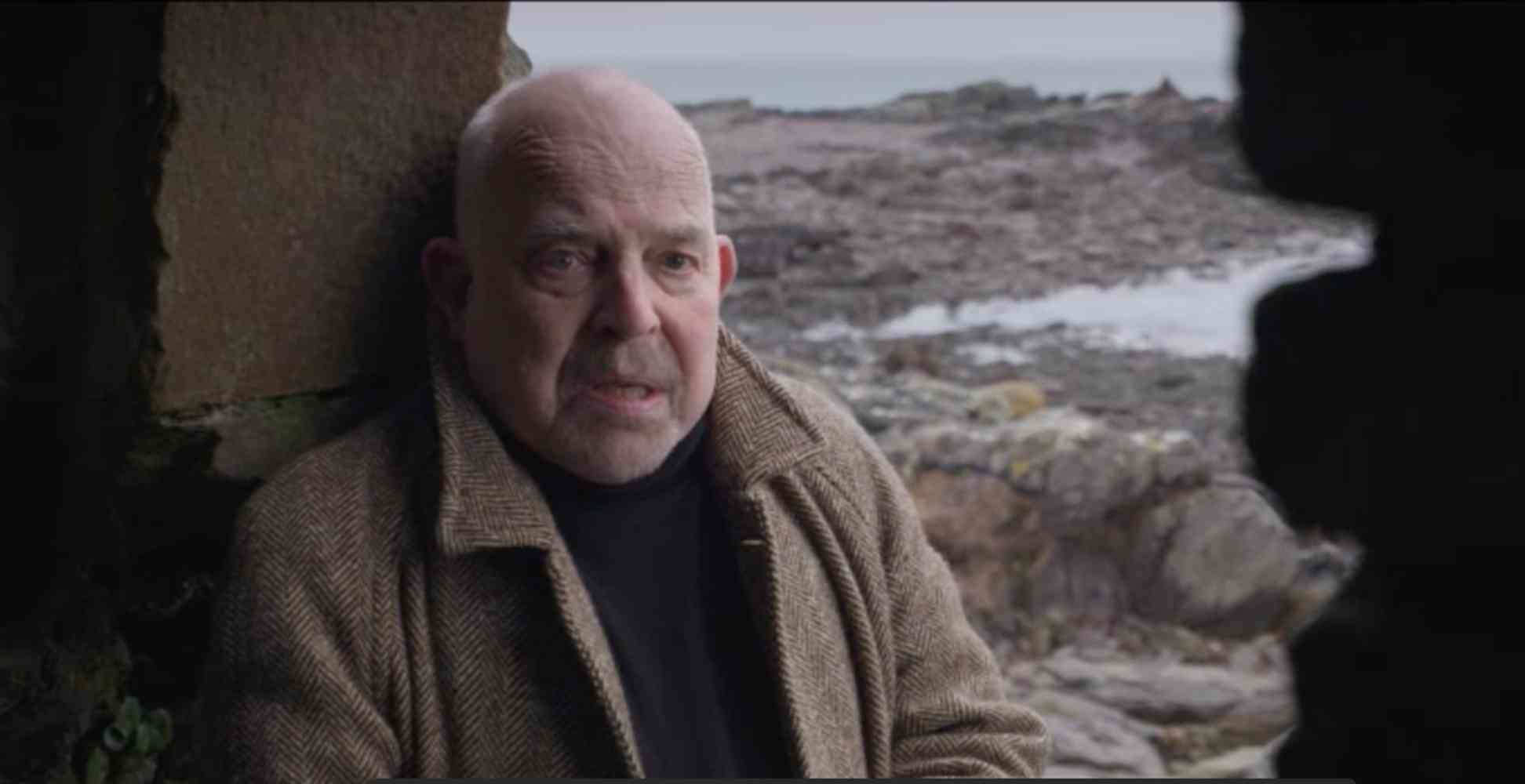 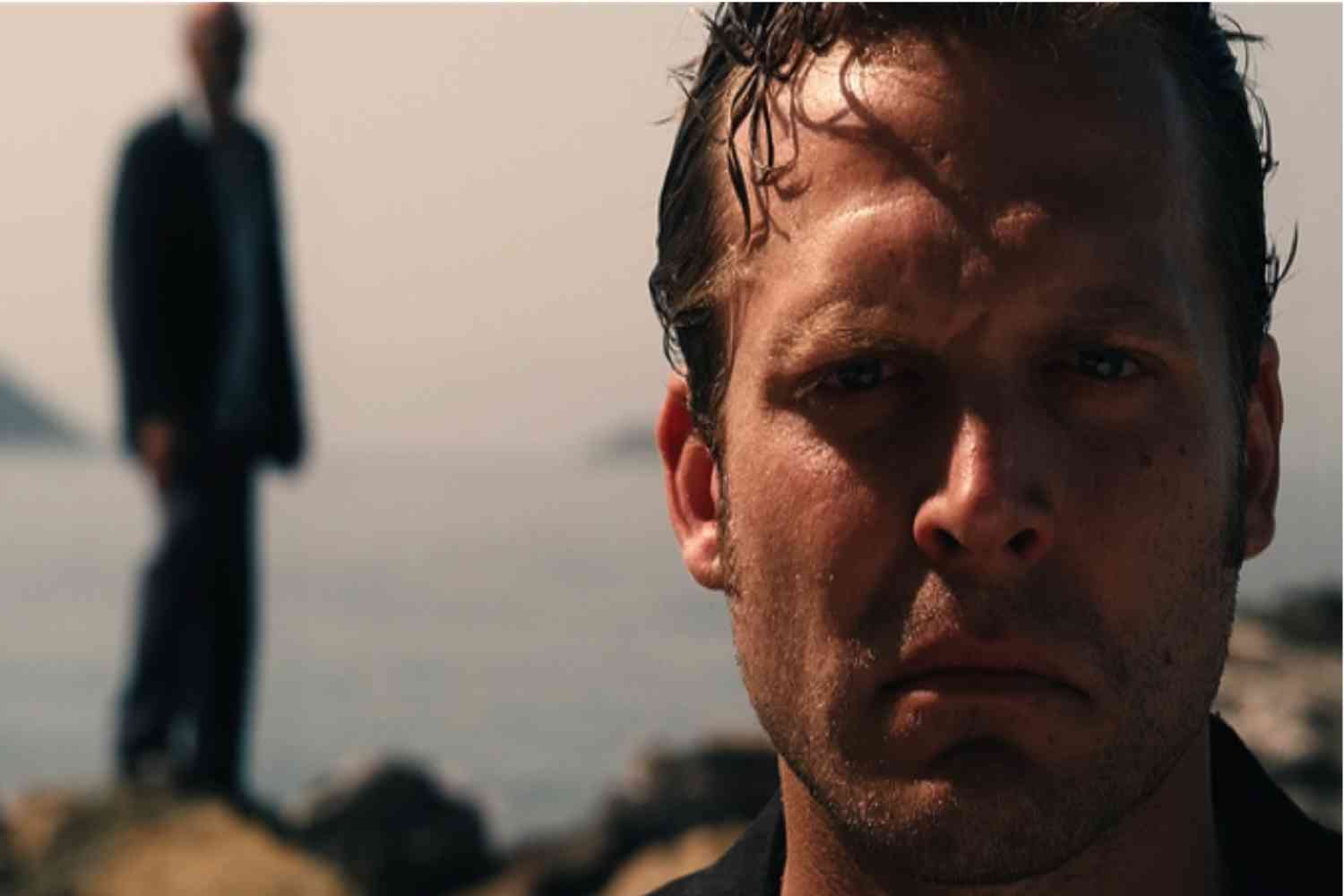 Oedipus and Tireseus: What is blindness?
Still from feature film 'OXI-An Act of Resistance' with Lex Shrapnel (UK) and Don Mouseau (USA). (Was Tireseus blind?) Screenplay drawn from research in psycho analysis, classical theatre and philosophy 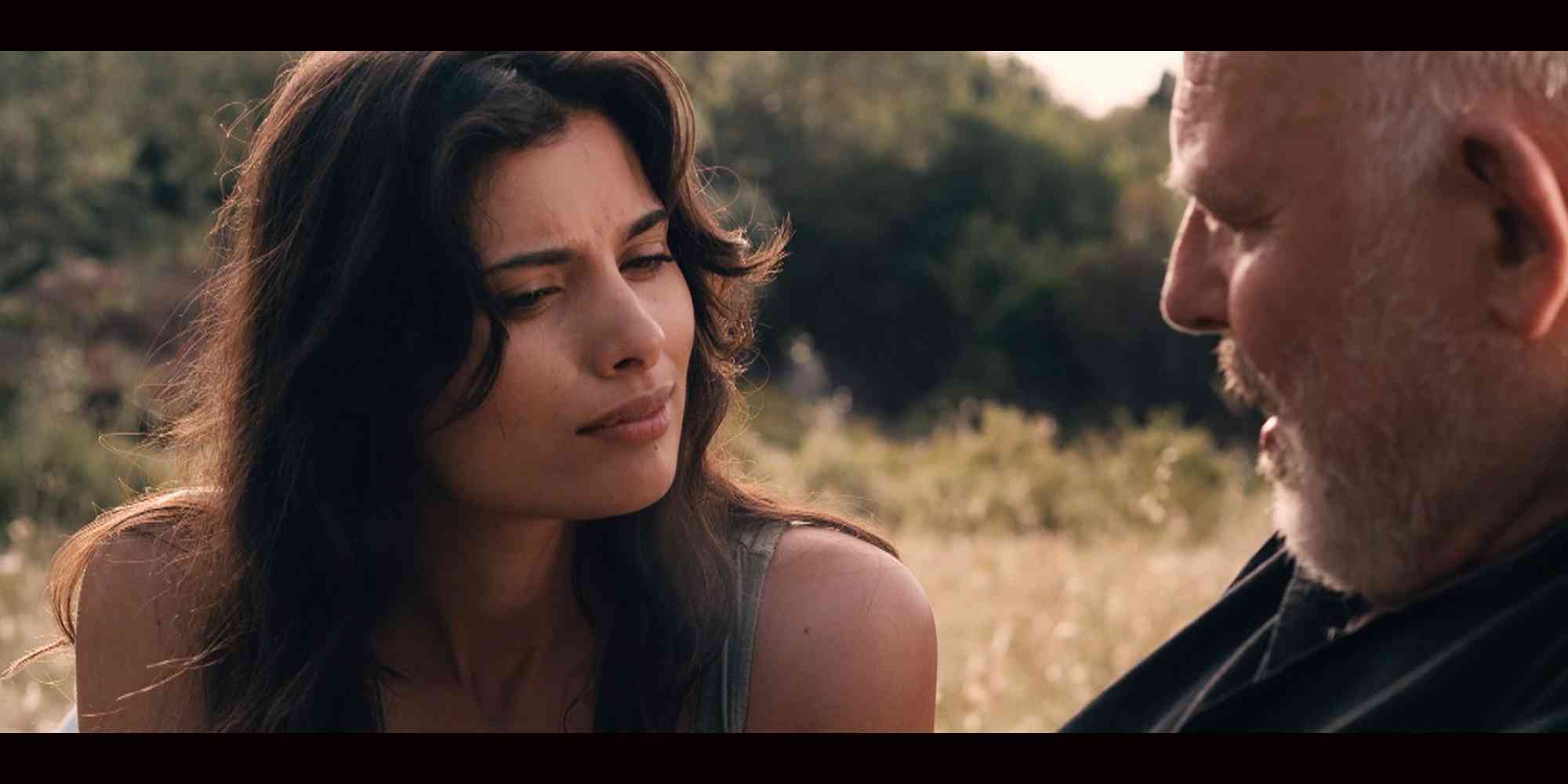 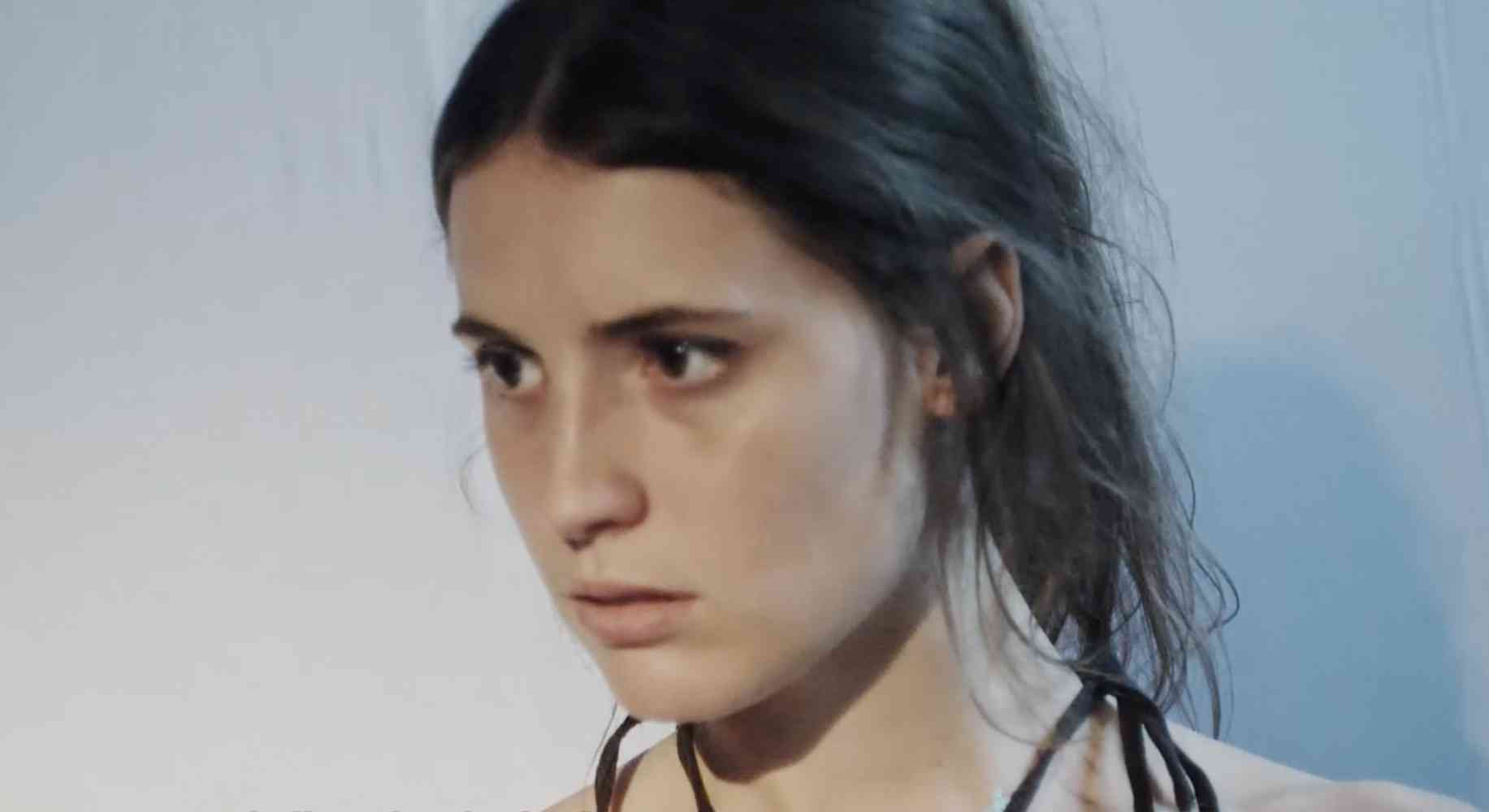 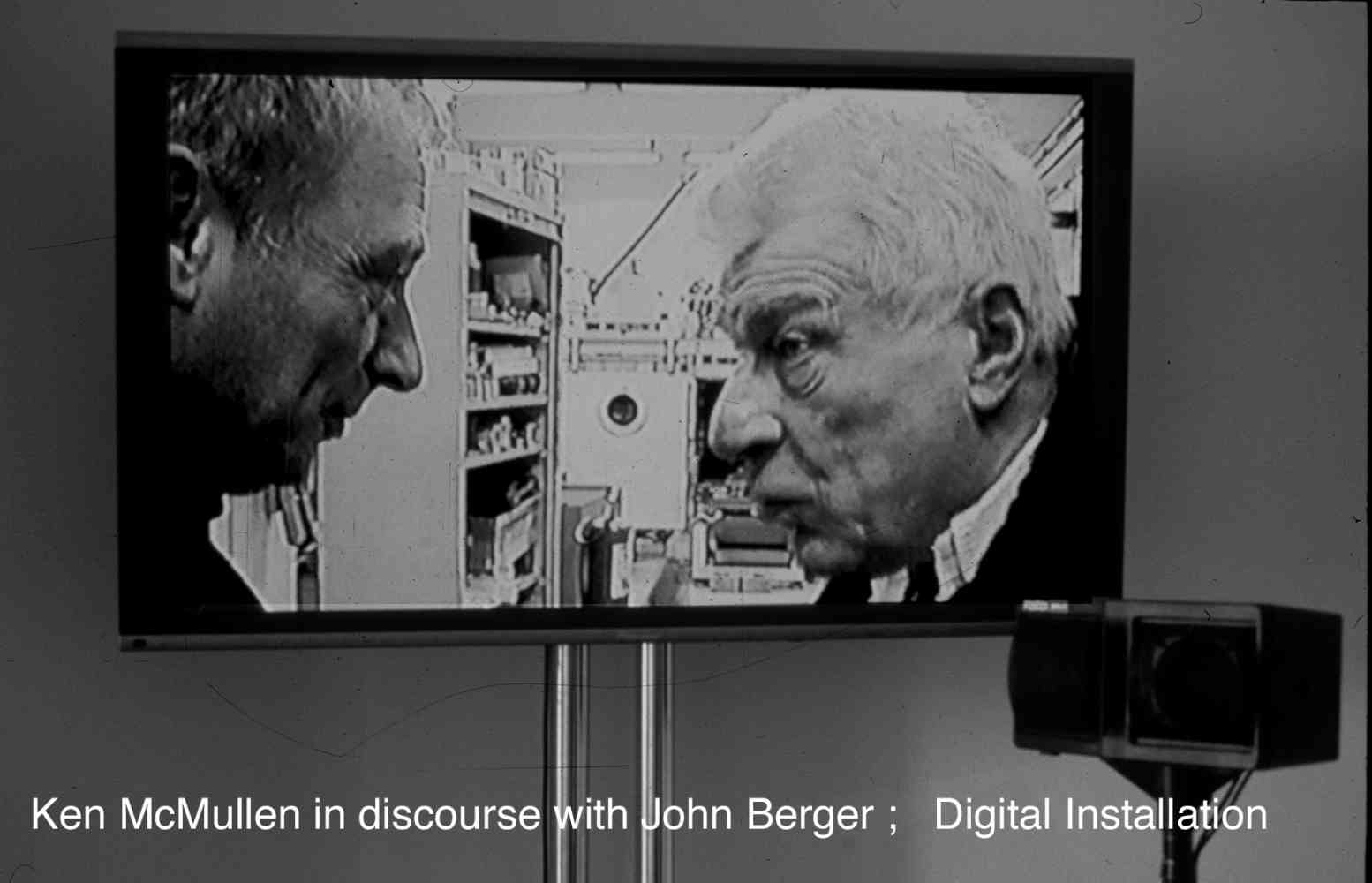 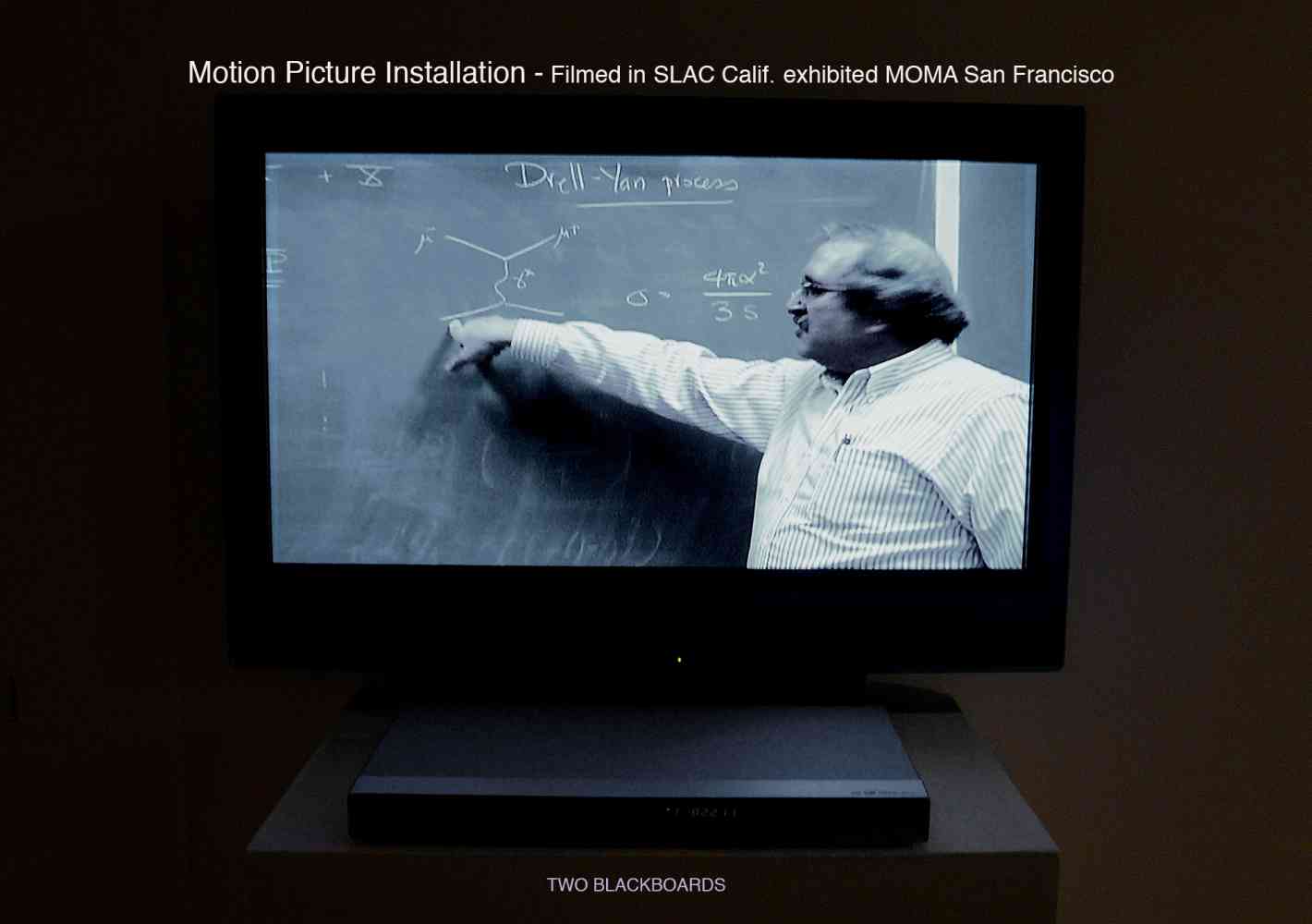 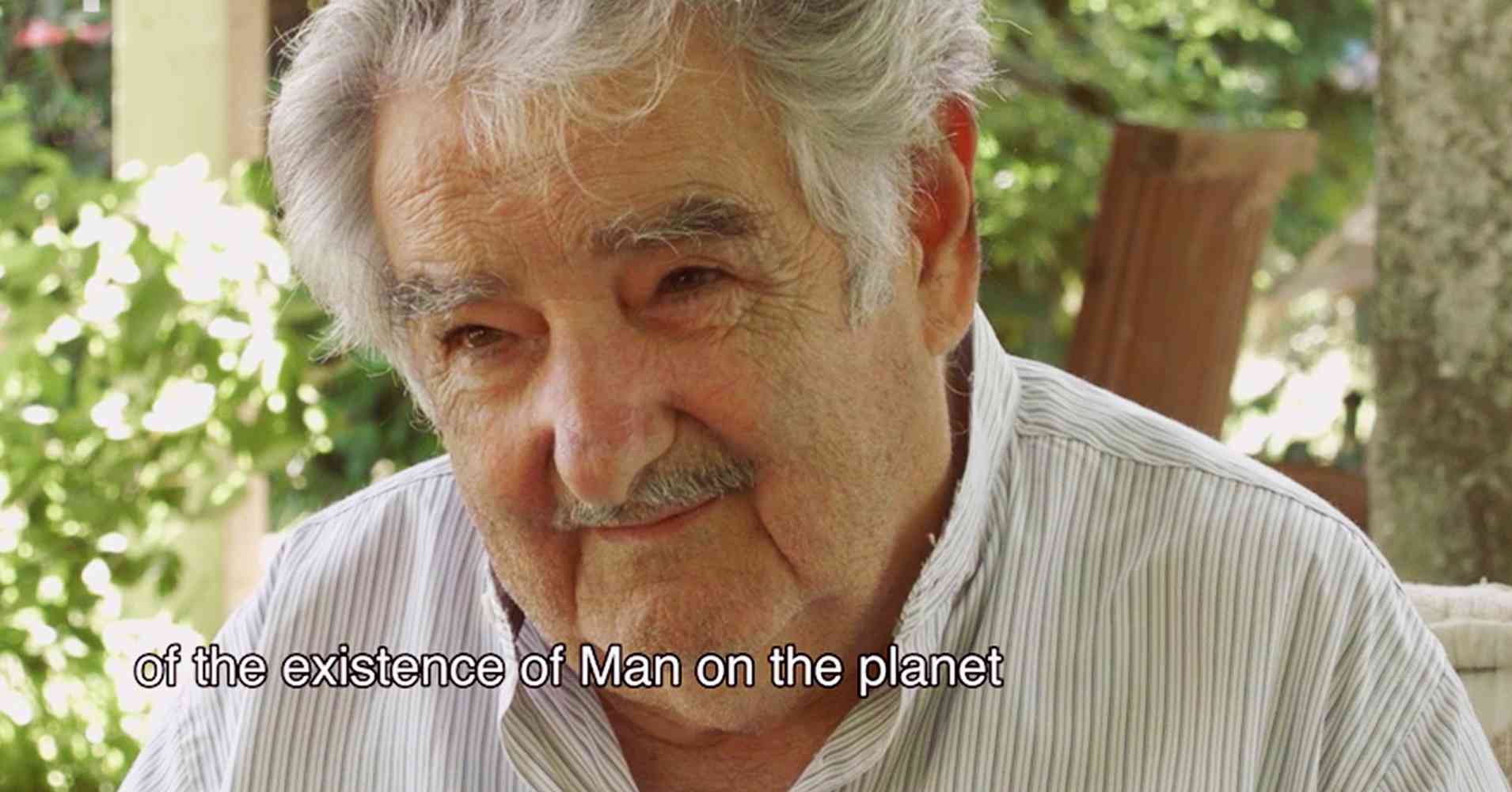 'Politics, Economics and Environment'. Documentary. Section from 3 hour interview with Pepe Mujica, President of Uruguay
A unique interview with one of the most enigmatic and profound political figures of the 21 century. 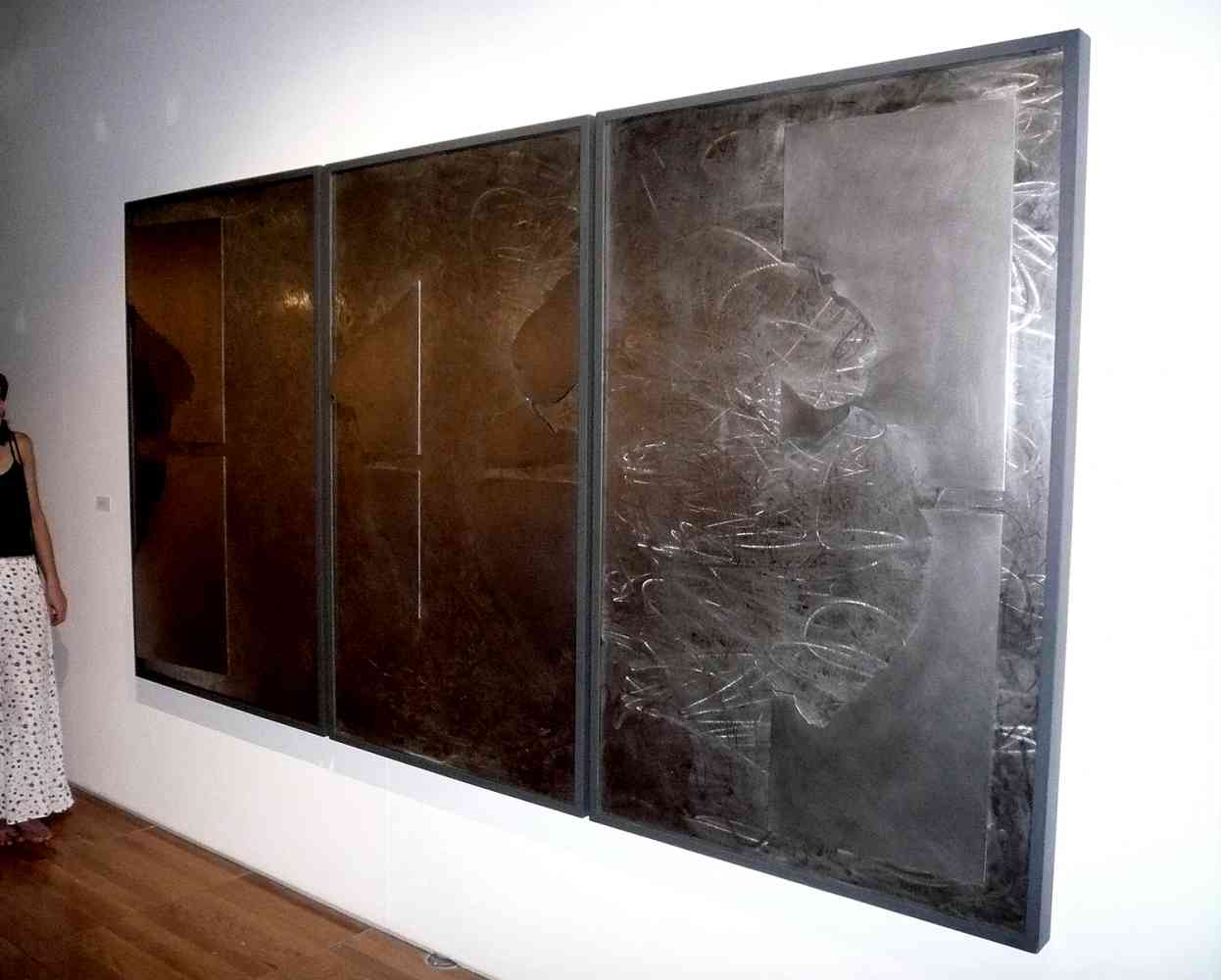 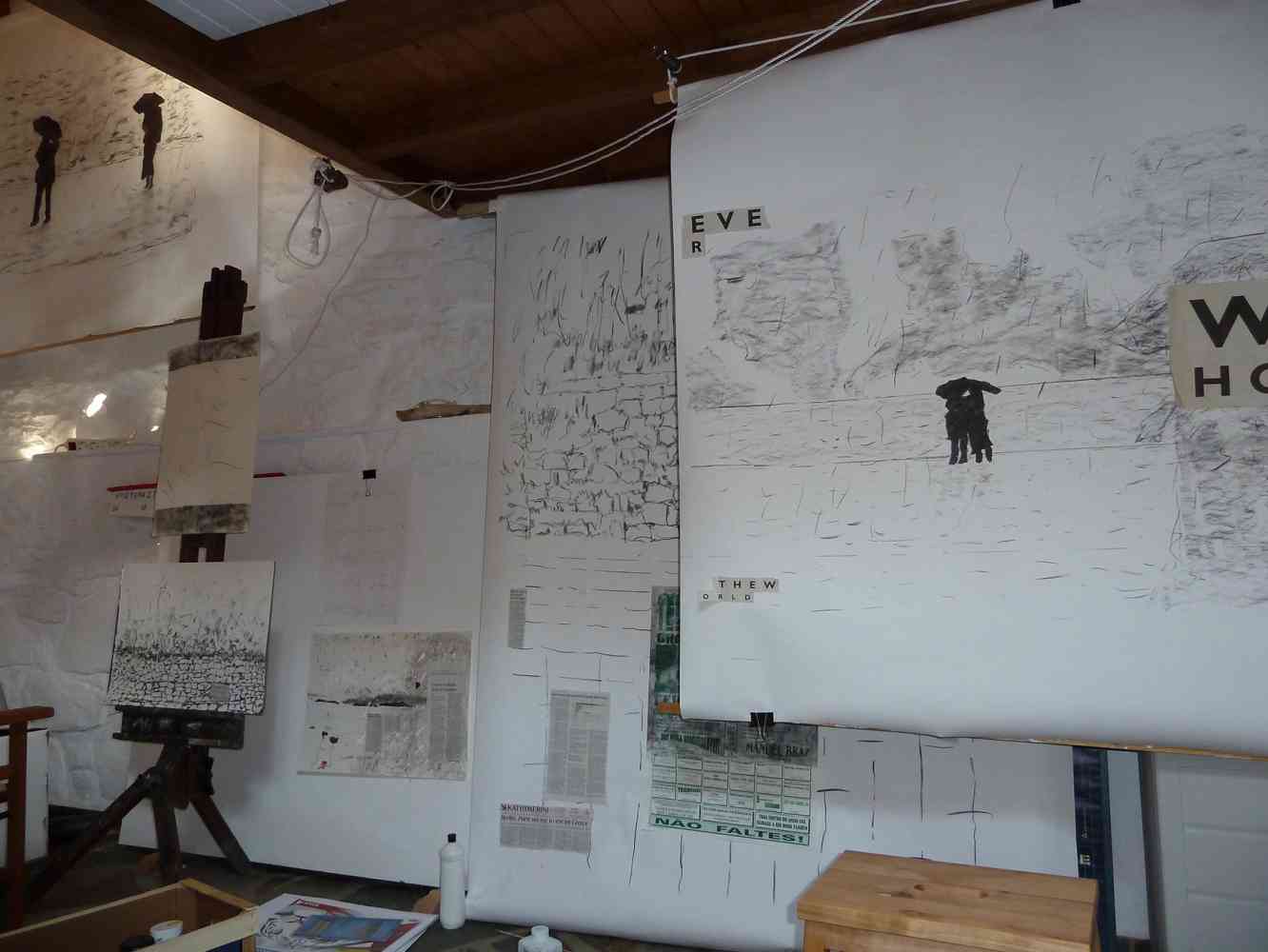 Studio as basis of all projects and ideas: (Action develops Thought)
Shot of my drawing studio in Greece... Exploring visual ideas for a feature film 'The Immortal Mortal' 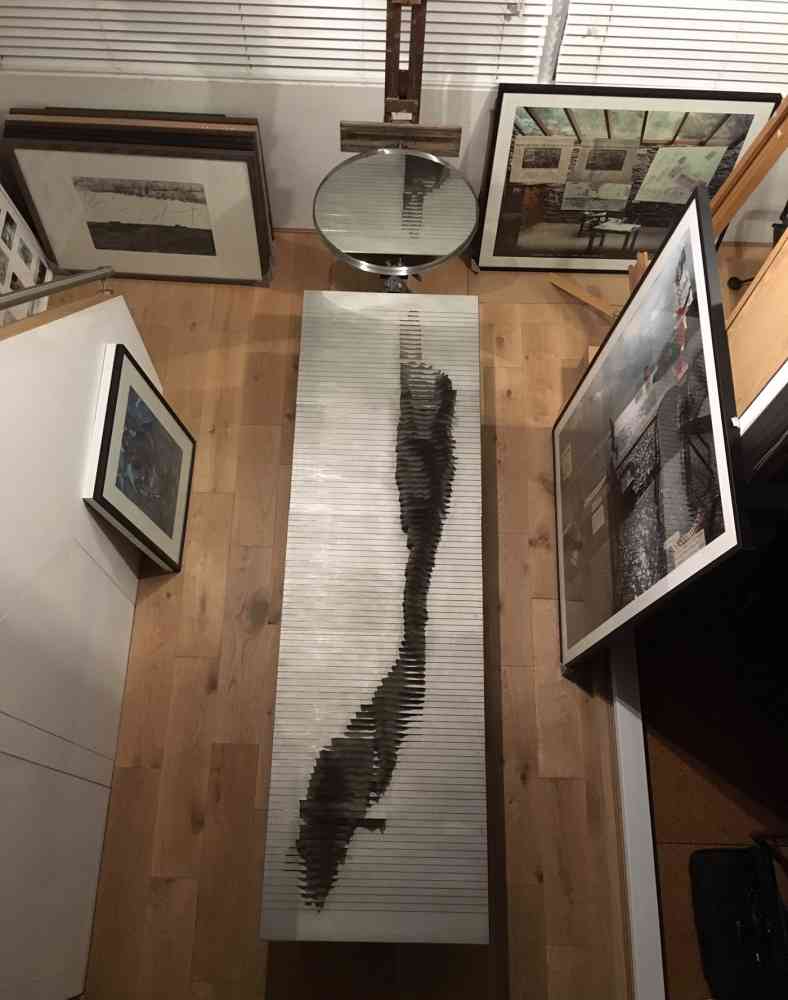 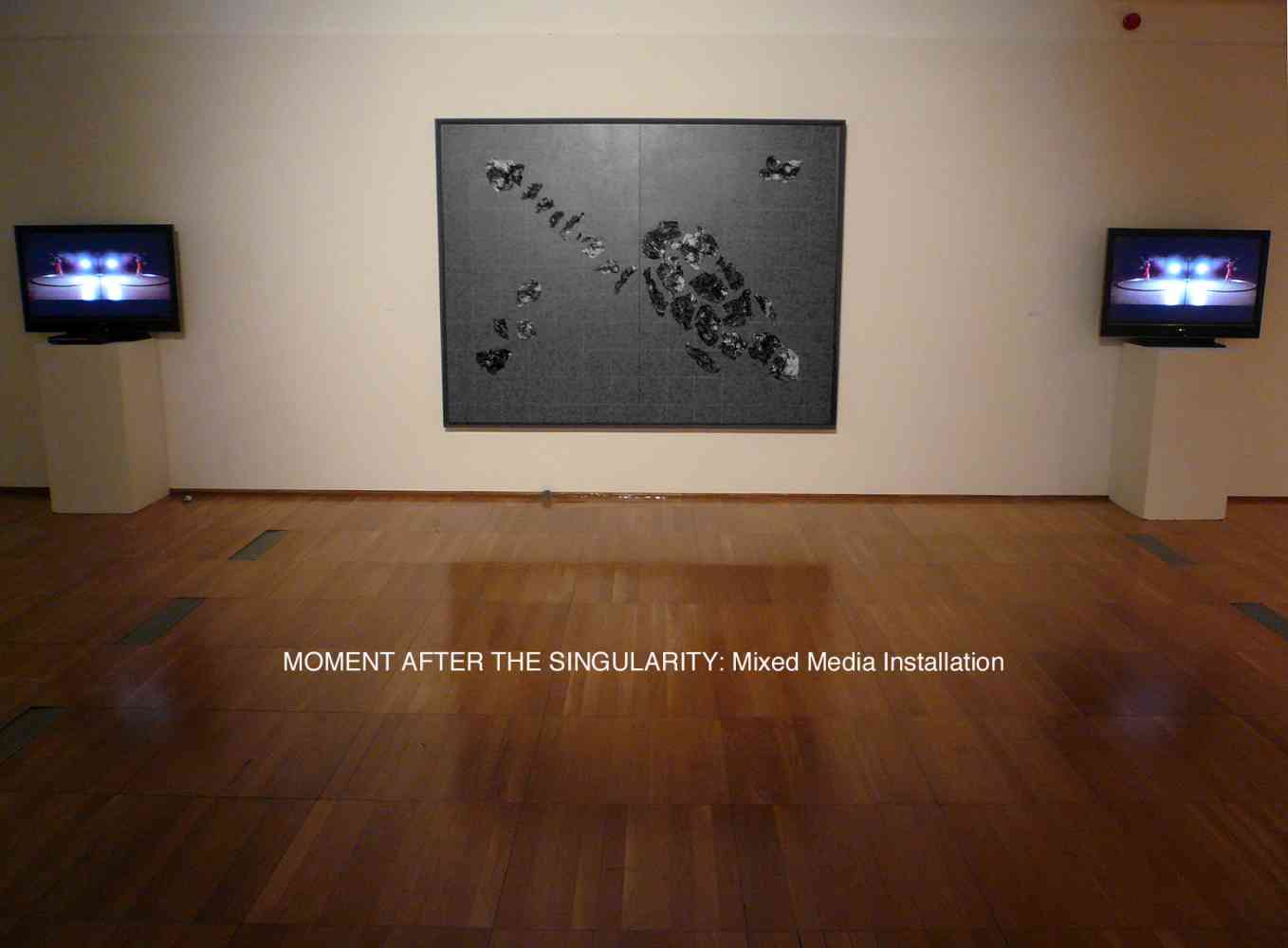 'Singularity': An Installation combining Motion Picture and Concrete Art Work
Exhibition photo from my exhibition 'Art + Cinema = Dark Energy'. A dialectical fusion of static and motion elements in this image of my gallery installation. 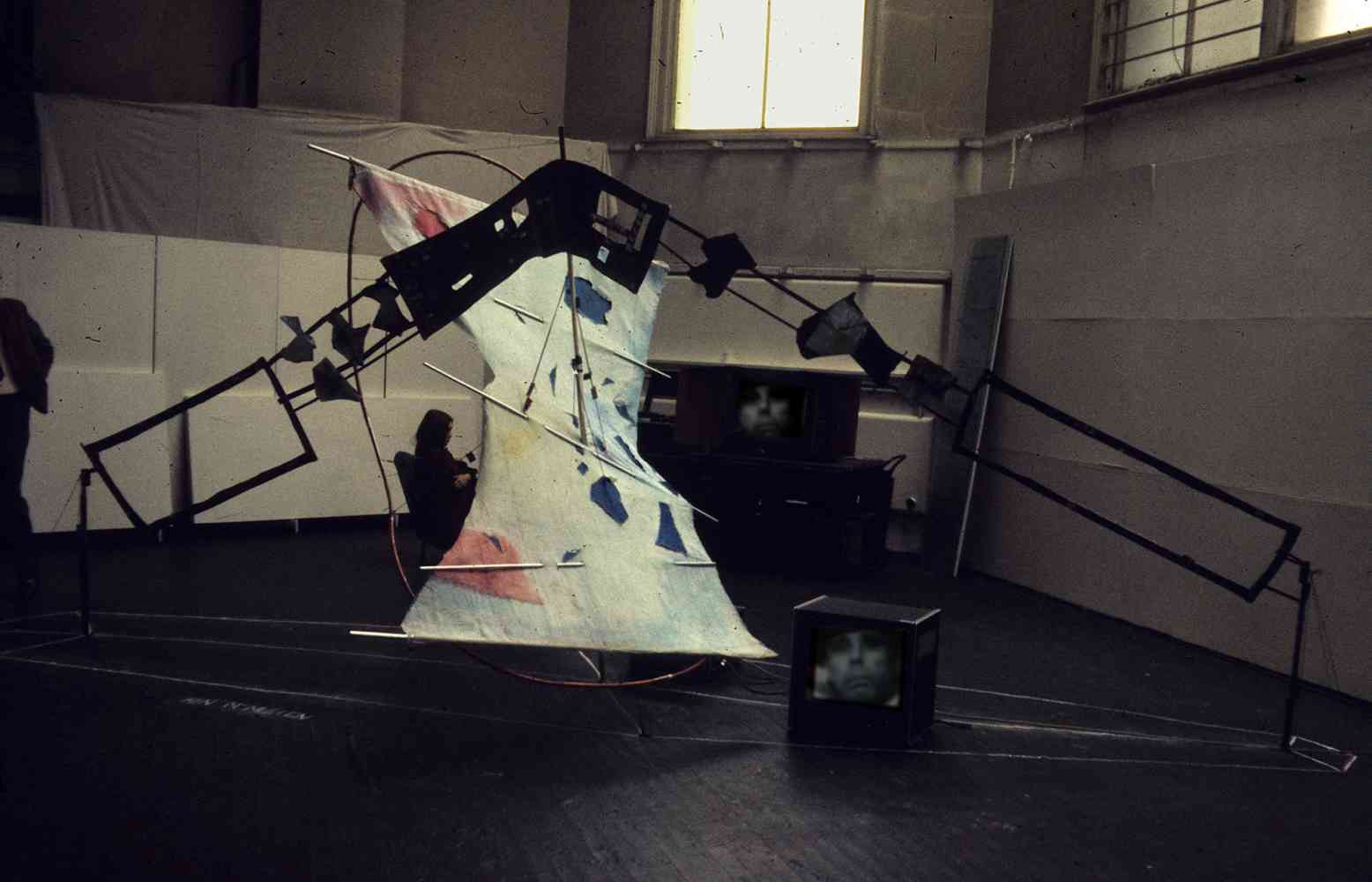 The Shaman's Coat: An Anthropological Art Work
An early work made in discussion with Heinz Koppel and Joseph Beuys on the pre-histories of artistic practice 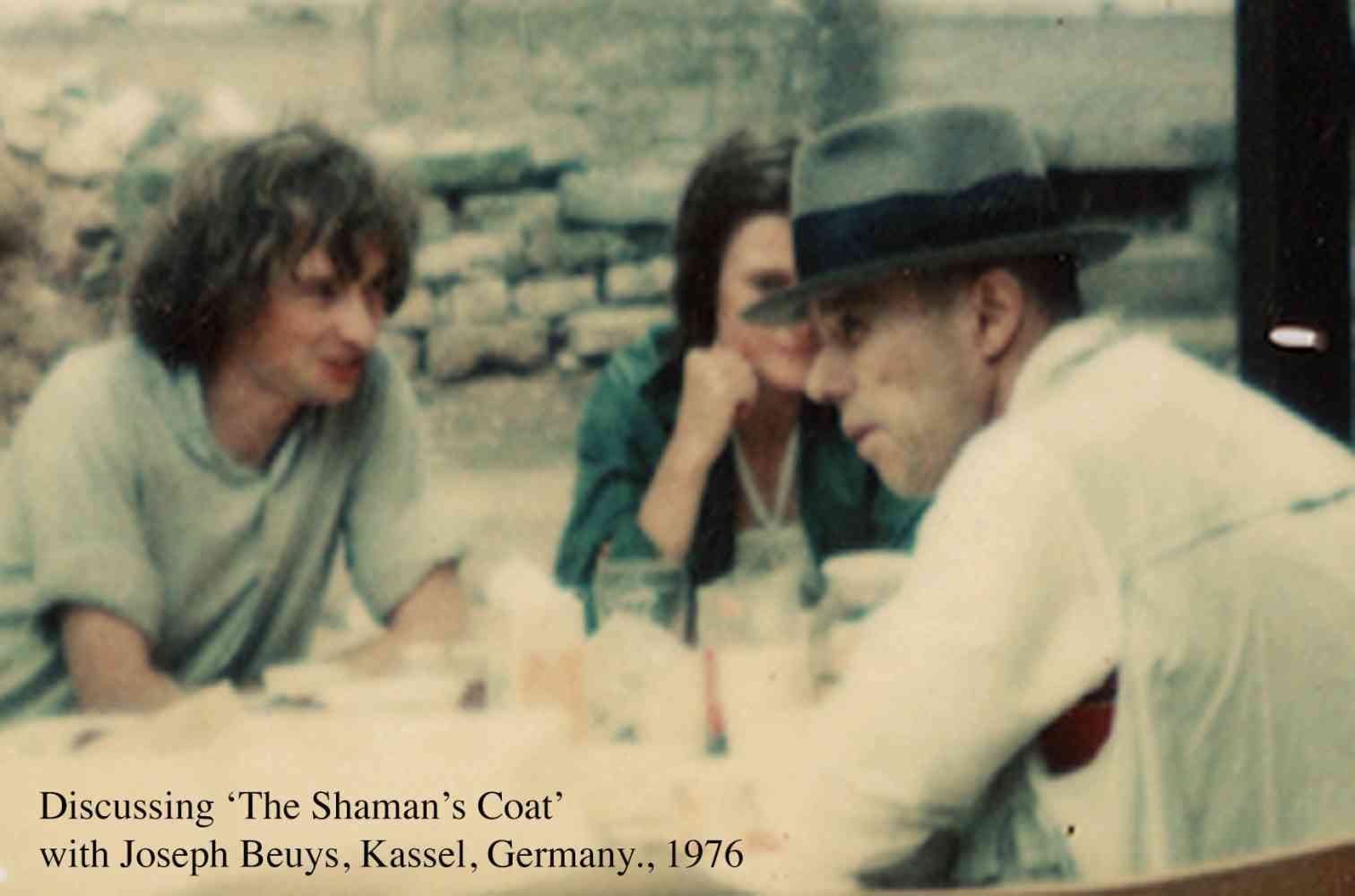