Clearing throws Adam in at the deep end

Clearing throws Adam in at the deep end 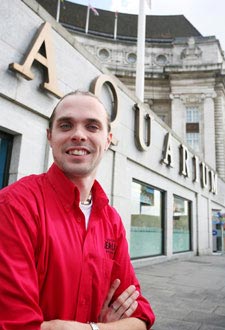 Civil engineer Adam Johnstone from Newcastle downed tools in 2006 to fulfil a childhood dream of becoming a marine biologist.Â  Now working in the education department at London Aquarium and considering doing his PhD, Adam has no regrets about his decision to build a different career path.

A natural talent at maths and science, Adamâ€™s early hopes of becoming a marine biologist were initially sunk when careers advisers at school discouraged him from what was considered to be a highly competitive field with limited career options.Â  Moving on to study the broader Advanced GNVQ in science at Further Education College, Adam was tempted by a civil engineering apprenticeship which looked like it would provide a solid career with job prospects.Â  Successful though he was in his application, Adam never quite forgot his passion for underwater adventure, even choosing to work in a local aquarium shop. Â â€œIâ€™d known for some time I was on the wrong career path, but sometimes itâ€™s difficult to admit you need to make a change,â€ Adam said.Â  â€œOnce I made that decision, I did all I could to find out what my options would be, getting online to research universities and download course descriptions.â€

A call to Kingston Universityâ€™s Clearing hotline confirmed there were places available on its marine and freshwater biology degree.Â  â€œI was really impressed when the head of the course called me personally to discuss my application and I felt reassured that my tough decision was going to be rewarded,â€ he said.

During his studies, Adam organised a trip to South Africa to study the hunting behaviour of great white sharks.Â  â€œThere are so many other doors that open when you start studying, different opportunities arise and it all helps build experience for your CV which is invaluable when you come to graduate,â€ he said.Â  Returning to university in his final year, Adam was able to include his great white shark research in his final year paper, earning him a First Class degree.

Going to university as a mature student, Adam got involved in the hockey team and also went scuba diving in Swanage.Â  â€œSocially, as well as academically, being at university has been hugely important to me,â€ he said.Â  â€œLooking back on the whole experience, I can see the decisions I made – even though they seemed difficult at the time – were critical to my future, and I feel so grateful to Kingston for putting me on the path toward achieving my dream.â€

Adam, now 30 and living in Tolworth, Surrey, says students shouldnâ€™t be anxious about the Clearing process but should seize the opportunity with both hands.Â  â€œDecide what you want to do and go for it.Â  I was full of self doubt when I started my degree, I wasnâ€™t even convinced I could pass – but I finished with a First, and am now considering a PhD,â€ Adam said.