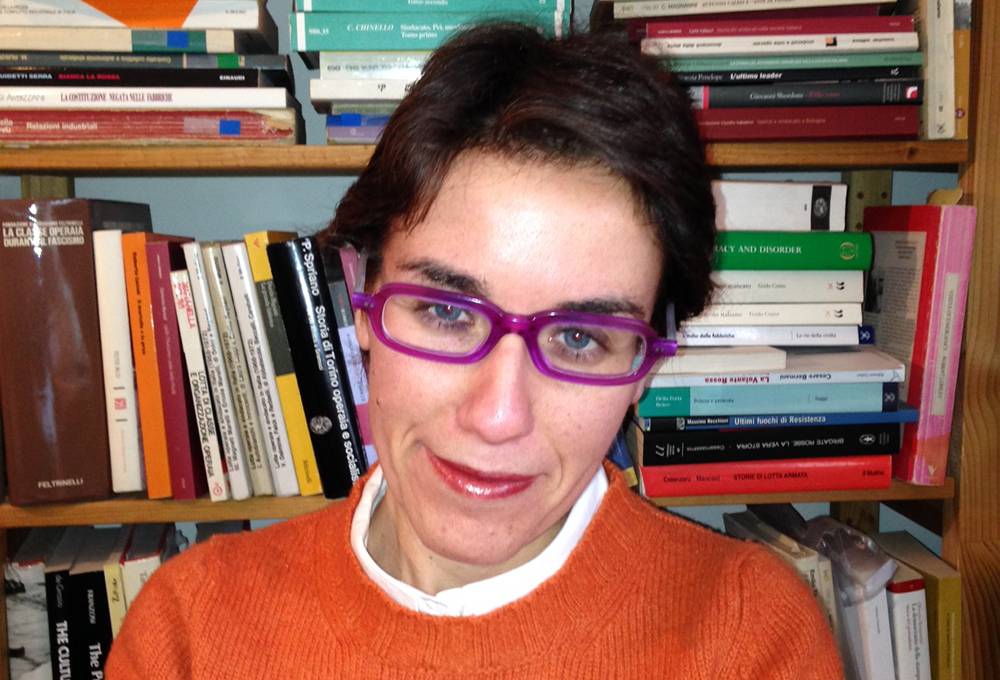 About
Research
Leadership and management

I am Professor of Contemporary European History within the Faculty of Business and Social Sciences (Politics).  I obtained my first degree in Milan and then a PhD at Queen Mary College (University of London). After a post-doctoral fellowship at St Antony's College, Oxford, I taught at the University of Milan and then joined Kingston. I have published on the British and the Italian Left after 1945; on memory and identity in post-war Italy; and protest and social movements.

I co-convene the Modern Italian History seminar at the Institute of Historical Research (School of Advanced Study, University of London) and sit on the Executive Committee of ASMI (the Association for the Study of Modern Italy).

I am also on the editorial boards of the following peer-reviewed journals: Journal of Balkan and Near East Studies, The Journal of Modern Italian Studies, Ricerche di Storia Politica and Rivista Storica del Socialismo.

Since 2018 I  have been co-editor of European History Quarterly (Sage), currently ranked at 40/89 in the History category, with an impact factor of 0.422.

My main research interests lie in contemporary European cultural and social history; and social movements. I welcome PhD applications in all these areas.

While my main focus has been on Italy and Britain, I have consistently explored connections between these and other countries and I have sought to place my research in a broader comparative context.

My most recent work focuses on the cultural analysis of protest and collective action. I am particularly interested in forms of protest, their circulation and re-adaptation to different needs and contexts throughout time and across different movements. In 2015 I published an article in Past and Present, on the influence of charivari (rough music) on Italian factory workers' protest in the post-1945 years.  Charivari rites, which comprised a wide range of shaming rituals, such as noise making, effigy parading, smearing, are generally associated with the early modern period. Historians of the 20th c. have hardly paid any attention to them since the assumption is that these forms of folk justice and their underlying culture didn't survive processes of industrialisation and modernisation. However, as my article demonstrates, during the labour struggles that took place in the 1960s-1970s, and particularly during the so-called Hot Autumn, which signalled the peak of the conflict, workers made large use of whistling and tin banging, mock trials, effigy parading, mock executions and dirtying against foremen and strikebreakers. In a volume later co-edited with Xabier Itcaina (Protest, Popular Culture and Tradition in Modern and Contemporary Western European History, Palgrave, 2017), we show that these rituals, albeit poorly understood and deciphered, are integral to our contemporary protest repertoire. In the book we also examine the influence of carnival, popular religious imagery and May customs on modern forms of contention, as well as the revival of folk songs by a variety of modern protest actors.

My research draws on anthropology, social movement studies and cultural history. In an article which I have just published on Labor History ('Toilets and Resistance in Italian factories in the 1950s' , vol 60, no. 6, 2019), I use Scott's notion of 'weapons of the weak' - the strategies used by subordinate classes when facing heavy repression or lack of resources -, to undertake an innovative analysis of workers' use of insults, irreverent behaviour, rumours and mockery of foremen and bosses to undermine the authority and legitimacy of factory hierarchies.

Thanks to a Leverhulme research fellowship (ended in Dec 2019), I am about to complete a book on industrial conflict in twentieth century Italy (under contract with Oxford University Press), which explores the range of forms of protest that workers utilised, how they changed and why, their underpinning rituals, meanings, strategic and symbolic functions.

I have always put a great effort in reaching out non academic audiences: over the last few years I have had the opportunity to talk about my work on Italy's national broadcaster, RAI Radio 3, The Guardian, the Times Higher Education Supplement,  Political Quarterly , the Danish daily broadsheet newspaper Politiken, and Dagens Nyheter (Sweden's largest circulating quality newspaper). I have spoken at the Festival of History in Genoa (Italy), a major cultural event attracting more than 20,000 participants and regularly contribute to public lectures series and events: most recently I gave a public lecture at The Courtauld Institute in London for their annual Frank Davis Memorial Lecture Series on Spaces and Images of Protest from the Renaissance to the modern day - my talk 'Protest in Movement. Marching in the modern city', focused on the use of marches in modern and contemporary protest.  I have recently participated to a round-table discussion on Art and Political engagement (with Egle Rindzeviciute and artist Katrin Plavcak) at the Stanley Picker Gallery & Dorich House Museum.

My research has been supported by a wide range of funding bodies: the EU (e.g. FP6 framework programme, Marie Curie, Jean Monnet funding); the Leverhulme Trust; the British Academy and the Italian Cultural Institute.

I am a member of the History Doctorate Programme of the University of Milan and currently co-supervising a thesis that explores the cult of the navy in 19th c. Italy. Since 2019 I have also started collaborating with the University of San Marino and supervised a thesis on social protest in liberal Italy (1896-1914).