This season's Kingston University Intramural five-a-side football league competition reached an exciting finale on 8 December. Reigning champions Compensated Pass made it to the final for the fourth consecutive season. They were joined by two new sides – the Outsiders and Dynamo Kingston – for a round robin-style eliminator followed by the final itself.

The first three matches of the round robin prelim were all very close, with no game settled by more than a two goal advantage. Outsiders took the advantage by beating their fellow newcomers Dynamo Kingston by a single goal to nil. They then went on to secure their place in the final with another closely fought 2–1 win over current champions Compensated Pass.

Nobody could pick a winner for the final, with the current champions against the very impressive qualifying league winners the Outsiders. In a fantastically close and entertaining game, which provided seven goals, the Outsiders just managed to make themselves the third name engraved on the trophy after edging it 4–3. 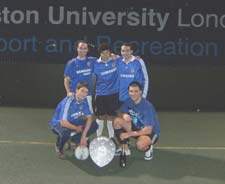