The Kingston University Intramural five-a-side league goes from strength to strength, with this term seeing the maximum number of teams enrolled and more on the waiting list. Twenty teams have signed up for this term's league, which commences on Tuesday 17 February 2009 at Tolworth Court sports ground.

The big question for this term is whether any team can overhaul Assies' winning run of three titles in a row? With a combination of some of the old favourites, including Assies' main rivals Compensated Pass, returning for another bite at the cherry and many new teams who fancy their chances, surely the winning streak can be ended?

This season sees two divisions each containing 10 randomly selected teams. Each team will play every other team in their division once. The tables will then be split in half and teams will compete against teams from the opposite division in a play-off. The finals week will see two finals, and four semi-finals. The first final will define the overall winner of the league and the second final is an opportunity for the weaker teams to reach and play in a league final against similar opposition. 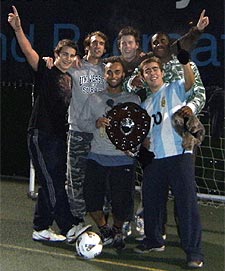