Kingston University Boat Club's ladies' squad began the year with most of the team never having rowed before. Despite several ups and downs, the ladies' squad has progressed at an impressive rate throughout the season. Their success is down to their excellent commitment throughout their training, combined with their determination to succeed and a â€˜never give up' attitude.

The ladies began with two water and two circuit training sessions a week, which they had to balance with their studying and socialising, and soon headed into their first race in February. Completely out of sync and with only seven of the eight ladies actually rowing, the result was a bit of an eye-opener!

How did this first result affect the girls? They simply trained harder and longer and entered more races, and as their fitness and team spirit grew their results began to improve. First a good result at the Putney 5k, followed by a third placed finish at the Kingston Head, earning Kingston University BUCS points for the first time.

Soon the girls' squad became a regular four and the training became even more competitive; they completed the 2k Nottingham Regatta course in 09:04 awarding them a well-deserved and creditable seventh place. The training continued to increase with five river outings per week and, although the bad luck also decided to take effect, with another crew crashing into their boat during one race and a blade snapping whilst leading another, the ladies fought on.

Another good result at Twickenham Regatta saw the squad, coached by Richard Nelson of Kingston Rowing Club, embark on their toughest training regime so far in preparation for the Henley Royal Regatta. It was the six river outings per week, all following 5km runs, combined with a strict diet that really prepared the squad for their biggest challenge yet.

"It's brought tears to my eyes just thinking of our achievements this year – from novices to rowing at Henley," admitted Sophie Guse, Vice President of Kingston University Boat Club. "At Henley we first rowed our way through the qualifiers, then beat the University of Bristol hands down. We were eventually knocked out in the quarter finals by the University of Edinburgh, the 2008 winners.

"The row was one we'll all remember for life I'm sure. We drove ourselves to pain never experienced before. Feeling like our thighs would explode and our lungs were filling with blood, we pushed on through the water, trying to make every one of those inches count as our blades powered through the water – simply unforgettable. At the end of the race course, realising quite what we've achieved in a year we took a deep breath and broke down, amazed with our own efforts. We were gutted we weren't through – but still happy to be there, happy to be with each other and happy with everything we'd achieved." 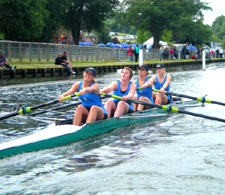