One minute was all it took for Kingston University student Tenesha Williams to scoop gold in women's boxing at the British University and College Sports Championships in Sheffield. The 18 year old won her fight in the women's 60 kg category by beating favourite Jade Mellor.

Tenesha joined Kingston University Boxing Club when she started studying sociology in October 2008. The bout at the British University and College Sports Championships was only her third fight. "If someone had told me when I started boxing six months ago that I'd be British Universities' champion I wouldn't have believed them," said Tenesha. "I started boxing just to keep fit and really enjoyed it. I was a bit worried about fighting someone like Jade, who is quite well known in boxing circles, but I just got into the ring and gave it my all."

The fight only lasted just over a minute and the Kingston student didn't know if she had done enough until she heard the judges' decision. "When I found out I'd won I was so happy," she said. "It was amazing. I phoned my mum and she was shocked but really happy for me."

Tenesha is now hoping sports chiefs allow women's boxing as an event at the London 2012 Olympics. "I've love to be able to fight at the Olympics," she said. "If they decide women's boxing is going to be part of the competition then I hope to be there." 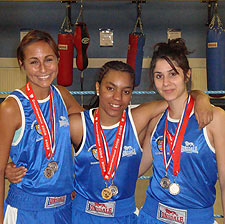