Since October 2008 Kingston University Boat Club has been building up towards the British University and College Sport (BUCS) events. BUCS is divided into two categories – novice (those who have only rowed this year) and seniors (those who have rowed for more than a year). As there are only two BUCS races a year, most of our students race under the banner of Kingston Rowing Club, with whom we have formed a brilliant and prosperous partnership over the past two years.

In short, the commitment shown by all of the novices and their coaching staff has seen them produce some impressive results, beating those who have rowed for much longer.

The planned February 2009 BUCS Head Championship was recently cancelled, leading to a lot of disappointment amongst the rowers. However BUCS agreed to reschedule the races and allocation of BUCS points using the Kingston Head held on 14 and 15 March 2009.

Kingston University novice girls did fantastically well at this event, finishing third not just in novice eights but championship eights where they competed against much more experienced rowers. The boys have also done very well, producing competitive results at Reading, Kingston and the Head of the River Race.

The commitment that everyone in the club has shown cannot be summed up easily. However, with novices training for ten hours a week and seniors more than 20, the level of commitment required to achieve good scores is evident.

Anyone can witness these dedicated students training on Wednesday afternoons on the water and the early hours of Saturday mornings. 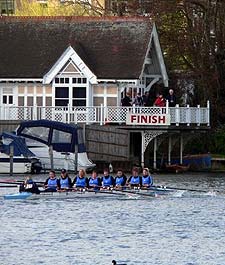