April 2009 saw the Kingston University Intramural five-a-side football league held at Tolworth Court sports ground come to a dramatic conclusion. The fourth season of the league attracted a record amount of teams, including staff and students, competing to get their name on the prestigious Winners Shield, which takes pride of place being displayed at the Fitness Centre reception on the Penrhyn Road campus.

Due to the large number of teams this season, two leagues were formed at random which lead to a play-off situation. This helped to group the stronger teams together to compete at finals night for the overall winners title and custom bottle of bubbly. But this also created a second semi-final and final where the best of the not so strong sides could also win a bottle of bubbly and enjoy the glory of winning a cup final!

There was also a win for newcomers Weston Court FC who turned over Valkyrie Boys 5-0 on aggregate to win a bottle of bubbly, but more importantly become the pride of the lower division and surely a force for next season's competition. 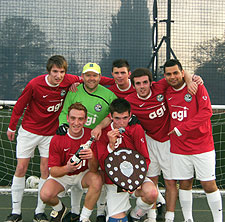