The main play-offs saw four new teams go head to head in a very closely fought set of matches for the accolade of etching their team name into the prestigious Intramural Shield that is displayed in the reception of the University's Fitness Centre at Penrhyn Road! With both of the previous finalists not even making the last four, the standards were very high and we were assured of a new name on the Shield.

The first semi-final between Ball Oaks and The Woodmen was so tight it remained level after both legs of the semis, forcing an even tighter penalty shoot-out that saw Ball Oaks squeeze through by the narrowest of margins with a 5–4 sudden death win. The first leg of the second semi between Inget Signal and Haiti FC was also a tight affair with neither team being able to hit the net. But Inget Signal came back the stronger in the second leg with a 2–0 win, setting up a final against Ball Oaks. The final provided plenty of goals and excitement, and saw Inget Signal come out on top with a 3–2 win.

The bottom halves of the tables saw Alioum Boukar's Wives move straight into the final with their opponents failing to show up. They faced Strevrep Utd who again had come through a tightly contested battle with Moodswings in the semi, with a 2–0 win in the second leg having drawn the first. The final produced a similar story to the first final with the 3–2 score line being repeated in the favour of Alioum Boukar's Wives, who will surely be looking to go one better next season and get into the top half of the table. 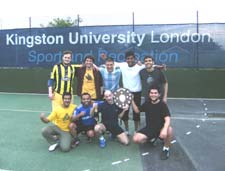