After a closely fought season the top teams from each league met in a knockout-style play-off, to crown the overall winner for the Spring 2011 season. With the current trophy holders from the Winter 2010 season, The Tartans, not re-entering this season to defend their crown and several new teams forming, it was bound to be an open and exciting season.

The top four teams from each league met in the quarter final play-offs. The winners of league one, Four Nations, sailed through to the semi-finals with a comfortable 4–0 victory over previous winners Compensated Pass, whilst the winners of league two, 14.275 Eggs FC, had a much tighter battle to gain their place in the semi-finals with a 2–1 win over FC Kosher.Â  Rahim Turay's Team who came second in league one and Paraletic Athletic who came second in league two, both claimed their places in the semi-finals with 3–0 wins over The Godfathers II and North Sea FC respectively.

The semi-finals were bound to be mouth-watering prospects with the top two teams overall from both leagues contesting a place in the final and they lived up to expectation with very close 2–1 wins in both matches.Â  Interestingly the two teams that finished second in their leagues, both prevailed over the league winners. Paraletic Athletic ended the dreams of Four Nations whilst Rahim Turay's Team made sure 14.275 Eggs FC would not be etching their name into the shield this season.

The overall final saw Paraletic Athletic meet Rahim Turay's Team for the first time this season in what was reported to be a very tight encounter. With some good attacking play from both teams and no lack of effort or commitment from either team, the match swung both ways until Paraletic Athletic found the killer instinct and scored twice to seal the victory and get their names on the prestigious trophy. 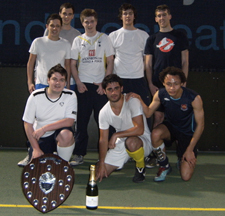