The finals night from 2010 held on 1 February 2011 brought plenty of action and desire among the finalists despite the long delay due to the Christmas break.

First the semi-finals for the overall competition produced some very close ties, with the Tartans creeping through to the final with a narrow 4–3 aggregate win over the always lively Inter Minan. The second semi final started off in a similar fashion with a tight first leg producing a fine one-goal margin. The second leg saw a more commanding and dominating performance from Kuns FC who disposed of their competition 6-0 and moved on to meet the Tartans in a closely fought final.

The Tartans (pictured top right) ran out the overall winners with a 3–1 win in the final, etching a new name on the shield (located in Tolworth Court sports ground pavilion reception) for the third season running.

Lunges Utd dominated the third and fourth division play off finals by consistently scoring three goals in both of their semi-final legs against 15 Eggs, and in the final giving them a 3–0 win over Sam Faulkner.Â Sam Faulkner were disappointed having come through a tough 4–4 aggregate semi-final draw and penalty shoot out against the always competitive Volovants. 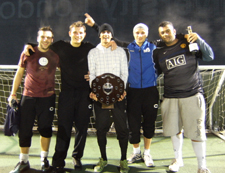