An early break for Alex was quickly cancelled out as Andrew broke back straight away to level the match at one game all.Â With both players making a bright start, Trainor once again broke Shore's serve with some great returning.Â  Trainor then backed the break up with an impressive hold from 0–40 down to go 3–1 up in the opening set. Trainor then began to stamp his authority on the match breaking again before holding a tight service game. He then broke Shore's serve to take the first set in a closely fought game, running everything down.

The second set began with a comfortable service game for Trainor, followed by an early break to go 2–0 ahead. He then held serve again in a very tight third game and it seemed Shore had no answer to the consistency of Trainor from the baseline.Â A host of unforced errors gifted Trainor a double break to move to a healthy 4–0 lead. Shore not giving in, then got one break back to end a run of nine straight games for Trainor. With a glimmer of hope, Shore was only to be broken again. With the finish line in sight, after one hour and 28 minutes Trainor kept his cool to serve out for the match, in what was a great performance. 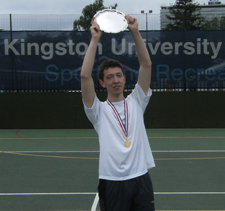