The University recognised the achievements of those on the University's Sports Performance Programme for talented athletes, at an awards presentation ceremony for the scheme which took place on Thursday 3 May 2012.

To mark such an exciting year for sport (and in particular to acknowledge the new KU Elite* level of the scheme) the athletes and invited guests were treated to an inspirational talk from Sally Gunnell.Â

Sally won a gold medal in the Barcelona Olympics in 1992 in the 400m Hurdles, and is the only woman ever to hold four major track titles concurrently – Olympic, World, European and Commonwealth.

Sally delivered a fascinating insight into her training preparations, thoughts and emotions leading up to her Olympic Games experience. By sharing her initial doubts and insecurities as an athlete and details of how she overcame them she was able to re-inforce how critical it is to have 'strong self belief' as a young athlete on the verge of making the jump to the pinnacle of their sport. The audience were clearly lifted by her inspirational stories and thrilled when she then passed around her Olympic Gold medal.

Several members of the audience were from the local community and commented on the evening:

"You have an excellent concentration of talent here."Â  Â

Sally and the director of Sport and Recreation Phil Muschamp then presented the athletes on the scheme with sports jackets and certificates to mark their individual achievements over the year.

Find out more information about the University's Sports Performance Programme.

*Those athletes currently under selection for the Olympic or Paralympic Games. 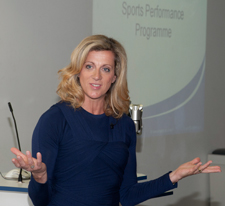