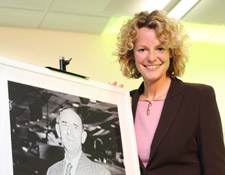 TV presenter Kate Humble opened a brand new library at Kingston University last Thursday honouring aeronautical hero Sir Sydney Camm - the engineering genius behind the Hawker Hurricane. Humble, whose grandfather worked with Sir Sydney as chief test pilot for the Hawker Aircraft company during World War II, discovered her aviation heritage when she was the subject of the BBC's Who Do You Think You Are?

Speaking in the new Sir Sydney Camm Centre, Ms Humble paid tribute to what she called a heroic generation.  "The legacy that my grandfather's generation handed down to us is that of a free country, where we can do what we want and say what we want," she said.  Referring to her grandfather, Bill, as a 'cleverer and braver Humble' she said it was important to honour the pioneers and risk-takers of yesteryear.  "If it is true that we look to the past to find inspiration for the future, there is a good reason to remember those who have achieved extraordinary things in their lives.  The pressures are different today, but engineering remains crucial to our future way of life - just like it was in my grandfather's day." 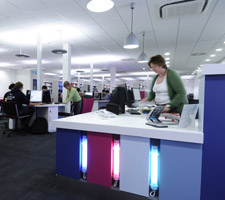 The Sir Sydney Camm Centre is based at the University's Roehampton Vale campus.  Born in 1893, a young Sydney Camm whiled away his time building model aircraft at home in Windsor.  Little did he know that his future achievements would, in 1941, prompt the News Chronicle headline "This man saved Britain."  Working his way up from shop floor worker to chief designer, his designs, including the Hawker Hurricane, Typhoon and Tempest played a pivotal role in Britain's war effort.

Information Specialist for the University's Faculty of Engineering, Bill Downey, is intrigued by Sir Sydney's achievements and researched his life and work as part of this special event.  "I had no idea what a monumental figure he was in British aviation and the extent of the debt the country owes him," he said.  "His career spans an extraordinary range from the age of the biplane in the 1920s right through to the Harrier of the 1950s.  It's an incredible legacy, and one that deserves to be remembered."

The decision to name the learning resources centre after such an influential and important figure had not been a difficult one, Mr Downey said.  "He is the most eminent engineer associated with the town of Kingston and the aeronautical courses at the University are the last link the town has to that heritage," he added. 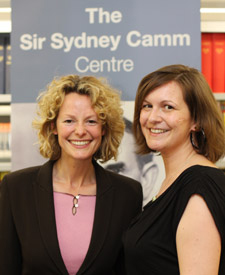 Great granddaughter of Sir Sydney, Chloe Dickson, said it was an honour to be there on her family's behalf.  "Standing here today listening to stories about his life and work really brings home how important he was to the outcome of World War II," she said.  Although Chloe did not meet her great grandfather, she believes he would have felt very proud to have the building named after him.  "It brings his name to the minds of the next generation of engineers and if that inspires them, then that is a fitting tribute," she said.

The Sir Sydney Camm Centre is packed full of resources including the latest in library, computing and multimedia facilities to aid Kingston's newest engineering pioneers.   The redevelopment includes a learning café and group work rooms as well as areas for silent work.  Studying aerospace engineering, aircraft engineering and aviation studies, Kingston's students often work in partnership with such companies as British Airways, KLM and Marshall Aerospace.

Dean of the Faculty of Engineering Dr Peter Mason said the work of pioneers such as Sir Sydney showed today's students how vital their work in the field of engineering could be.  "We are proud to honour the life achievements of one of Britain's most important aeronautical engineers, especially in the year that marks the 70th anniversary of the Hurricane's incredible achievements during the Battle of Britain," he said.   "The Sir Sydney Camm Centre has transformed the Roehampton Vale site, providing a combination of social and study space. It has become a hub for the whole Faculty - a great place to meet, develop projects and thrash out ideas," he said.