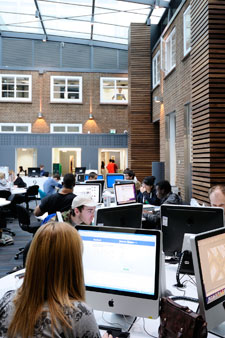 A former librarian at Kingston University's Knights Park, who went on to become the director of London's Victoria and Albert Museum, has opened a new learning resources centre named in her honour.

Dame Elizabeth Esteve-Coll, who led the V&A from 1987 to 1995, was welcomed back to the heart of the University's Faculty of Art, Design and Architecture for the special opening ceremony at its Knights Park campus.

The new centre is part of an £11 million improvement programme at Knights Park, which includes the refurbishment of studio space, an upgraded reception and gallery area and external landscaping.  "The work represents a huge investment in the students and staff of the Faculty of Art, Design and Architecture and confirms the great importance we place on research and communication within our subject areas," acting Dean of the Faculty Dr Trevor Keeble said.

The Dame Elizabeth Esteve-Coll Centre is located in what used to be an outdoor courtyard at the centre of a 1930s quadrangle-shaped building at Knights Park. A glass roof has been built to enclose the area - designed to maximise light and create a spacious and airy place for study. Many original features have been retained, including the brickwork, terrazzo and structural frame. The brick walls which surrounded the former courtyard now form the internal walls of the new centre.

"At Knights Park we enjoy an excellent relationship with our highly dedicated information services team. To be able to name the new Centre after Dame Elizabeth, herself a former subject librarian at the University, is a great honour for us," Dr Keeble said. "As with all staff and students who have passed through the faculty over the years, we are extremely proud of her inspirational achievements." 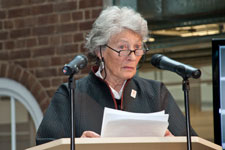 Visiting the University for the first time in many years, Dame Elizabeth recalled the time she oversaw the first major shakeup of learning resources combining the Knights Park library with the audio-visual unit at what was Kingston Polytechnic in the late 1970s. "No one else in England was doing anything quite like it," Dame Elizabeth said.  "Along with a colleague, I visited several libraries in Scotland where they were leading the way in using television as an aid to the learning process.  But the Kingston students were always two steps ahead of us, especially the ones at Knights Park who, being artists and designers, immediately grasped the importance of visual imagery."

The new Dame Elizabeth Esteve-Coll Centre, or 'Liz's Library' as Dame Elizabeth suggested it might be known, goes a stage further, incorporating an access technology room for disabled students and bookable student seminar rooms with media equipment for presentations.  The new venue is already proving popular, attracting 28 per cent more students through its turnstiles since it opened last month.  "Arts students have an individual and personal approach to interpreting the world around them.  They need knowledgeable mentors and the latest equipment to access the triggers which can illuminate their personal vision," she said.

Current learning resources centre manager Rowan Williamson said that one of the biggest changes since Dame Elizabeth's era in the 1970s was the size of the equipment used by students. "When Dame Elizabeth first introduced audio-visual technology, televisions and video recorders were much bigger than they are today. Even the computers in our old LRC were very different to the sleek Apple Mac computers in the new centre."

The staff's jobs had also changed significantly over the years, Miss Williamson said. "Once upon a time, every item that was taken from the libraries would have had to have been signed out by an assistant. Now most items are borrowed by students using our self-service machines leaving the staff free to concentrate on more complex queries," she added.

The new centre, designed by architects Pascall + Watson, boasts several sustainable features. The atrium roof allows rainwater to run off into underground storage tanks which is then used to flush the toilets. An array of solar thermal panels heats water and photovoltaic panels generate electricity. The building's sustainable features are designed to provide 20 per cent of its energy. Meanwhile, sections of the glass roof open and close automatically to make sure the temperature is controlled whatever the weather.

But one new feature of the centre took its inspiration directly from the 1950s.  A time capsule buried at the campus in 1953 and excavated in 2011 at the beginning of the building work was reburied as part of the opening ceremony with some additional objects from the 21st Century. 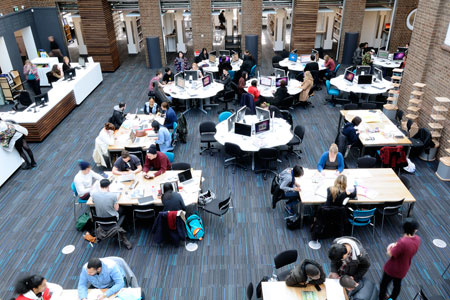