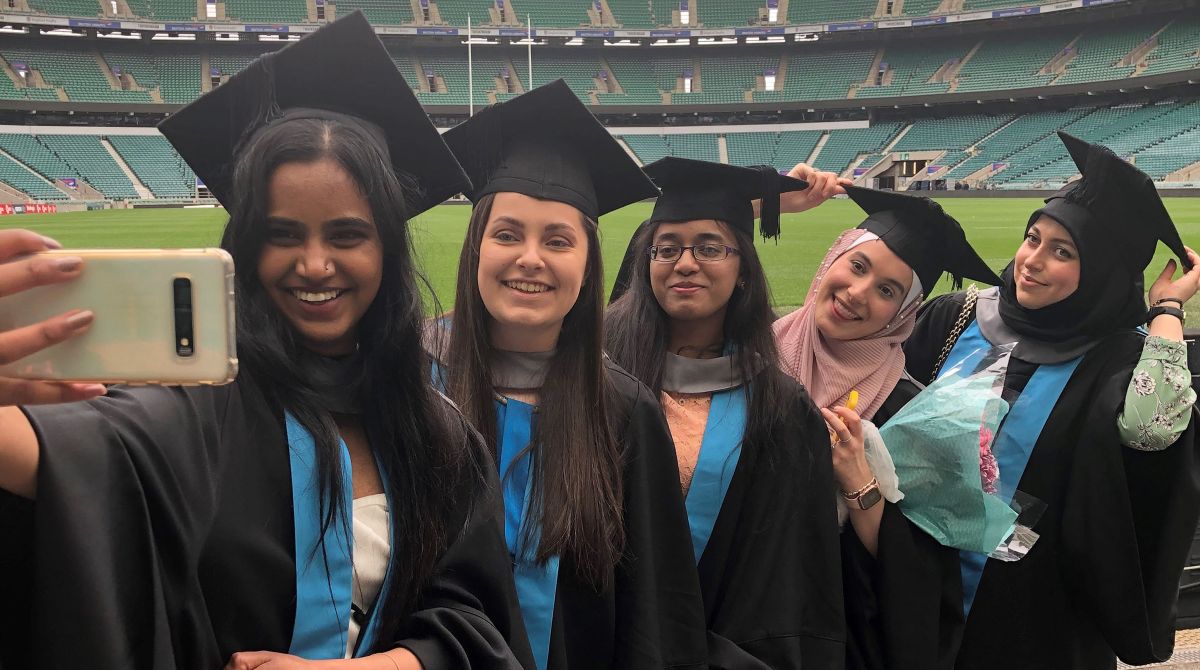 Almost 5,000 Kingston University alumni celebrated their graduations at Twickenham Stadium in May

Kingston University students, staff and alumni achieved many prestigious awards, milestones and other notable successes in 2022. As the year draws to a close, we reflect on the highlights of the past 12 months that also saw the launch of the Town House strategy, which sets out our vision for the future of education and a new direction for the University in 2023 and beyond.

In January, law graduate Pamela Hutchinson, Global Head of Diversity and Inclusion at Bloomberg LP, was recognised for services to the financial sector in the New Year Honours list. Also recognised was honorary graduate Paul Greengrass, award-winning director of the Jason Bourne films.

The University community celebrated LGBT+ History Month in February with a varied programme of engaging events and, later in the year, staff and students came together in solidarity as Kingston University joined forces with six London universities to march at the 50th anniversary of Pride in London. 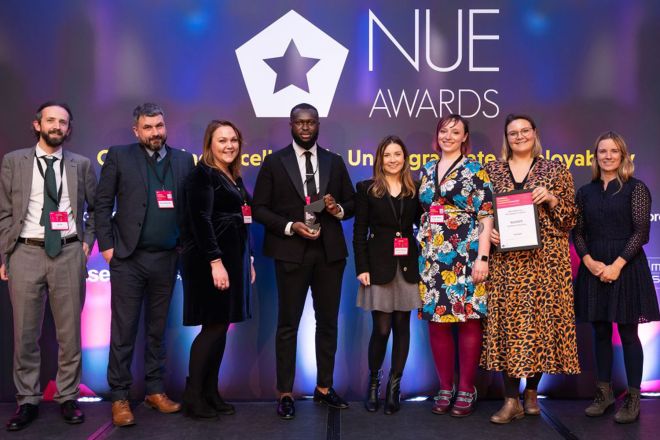 To mark International Women's Day and Women's History Month, staff, students and alumni committed to calling out inequality to #BreakTheBias. March also saw the launch of Kingston RISE Research Leadership Academy, which aims to give academic staff and PhD students a chance to advance their research skills and network with peers.

In April, celebrations were abundant when Town House picked up the EU Prize for Contemporary Architecture, the Mies van der Rohe Award – the most prestigious award in European architecture. This followed the flagship building, which is located on the Penrhyn Road campus,winning the Royal Institute of British Architects (RIBA) Stirling Prize in 2021.

After a three-year hiatus due to the pandemic, Varsity made a welcome comeback as Kingston students competed for sporting supremacy against other London universities in 11 sports over four days. 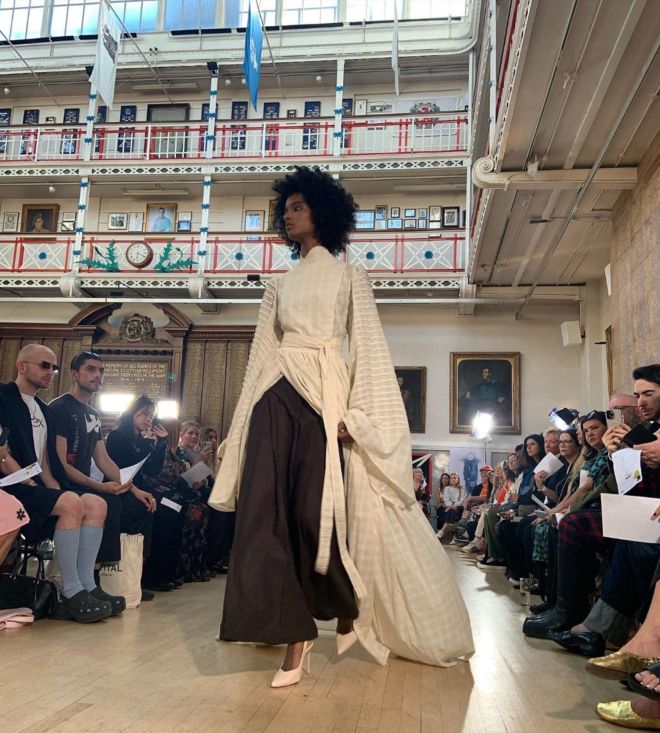 Fashion BA (Hons) students showcased their designs at London Scottish House's Drill HallThe wait was finally over in May when almost 5,000 graduates crossed the stage and celebrated their academic achievements at our graduation ceremonies at Twickenham Stadium, which had been delayed due to the Covid-19 pandemic. This included 85-year-old Member of the House of Lords, Martin Thomas, collecting his PhD and declaring that no one is ever too old to keep learning.

The celebrations continued when 70 per cent of the University's research was rated as world-leading or internationally excellent in the Government's latest Research Excellence Framework (REF). The results represented a 10 per cent increase from the previous assessment, published in 2014.

Third-year student Jessica Ball also won best learning disabilities student nurse at the Student Nursing Times Awards, while our Beyond Barriers alumni mentors and student mentees came together to mark the achievements of this year's participants.

In June, Kingston University was ranked number one for graduate start-ups in the UK, demonstrating the impact of entrepreneurial initiatives such as Bright Ideas, the Nest and HackCentre.

Staff and students rubbed shoulders with parliamentarians and business leaders at the launch of our Future Skills report at the House of Commons, part of a major campaign highlighting the importance of skills for innovation. The sector-leading work was further recognised later in the year when it was named exceptional campaign of the year at the annual PRCA-PoliMonitor Public Affairs Awards.

In July, we celebrated the academic achievements of some 4,000 students at our summer graduation ceremonies at Kingston's Rose Theatre followed by a reception at Town House. The ceremonies also recognised the contributions of former Bupa CEO Valerie Gooding CBE and former Attorney General Dominic Grieve QC, who received honorary doctorates.

The spotlight turned to sport, culture and media in August when drama alumna Asha Philip won a silver medal with the 4x100m women's relay team and business alumnus Will Calnan won a bronze medal with the men's hockey team at the Commonwealth Games in Birmingham. 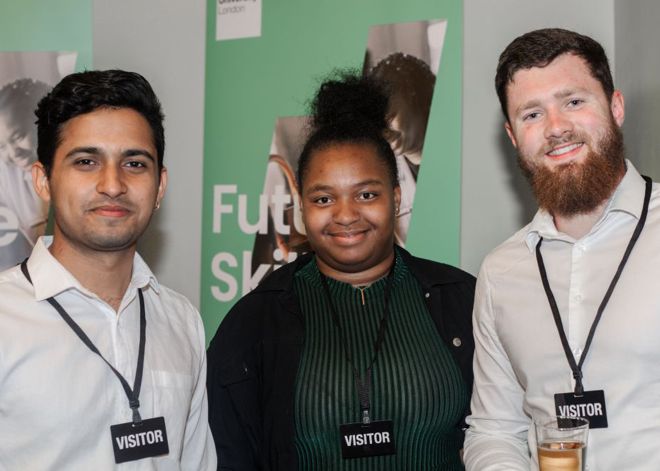 London Fashion Week showcased the creative talents of more than 30 designers from Kingston School of Art as they unveiled their graduate collections and our Network of Equality Champions initiative was shortlisted for a Times Higher Education Award.

October saw the launch of the University's Town House Strategy, which will transform students' education by embedding future skills for career success across the curriculum. Kingston University's Vice-Chancellor, Professor Steven Spier, was invited to speak at a House of Lords select committee hearing, where he set out the need for a progressive new model of education centred around ensuring graduates were equipped with the skillset most needed by industry.

Research by psychology PhD student Ece Beren Barklam into the benefits of owning a pet to cope with the stresses of everyday life made global headlines, while Kingston Business School students and graduates were invited to the House of Lords for the launch of the Next Generation Report to discuss the future of entrepreneurship.

In November, cutting-edge computer science research was published that revealed artificial intelligence-enabled eye scans could be used to accurately predict whether a person was at high risk of heart disease.

Initiatives to support students impacted by the cost of living crisis continued in the Autumn with a book drive to re-distribute donated text books and novels to students and a coat and warm clothes drive, where items donated by staff were made available to students. Research into foodbanks and the prevalence of community supermarkets was also published by Kingston University experts. 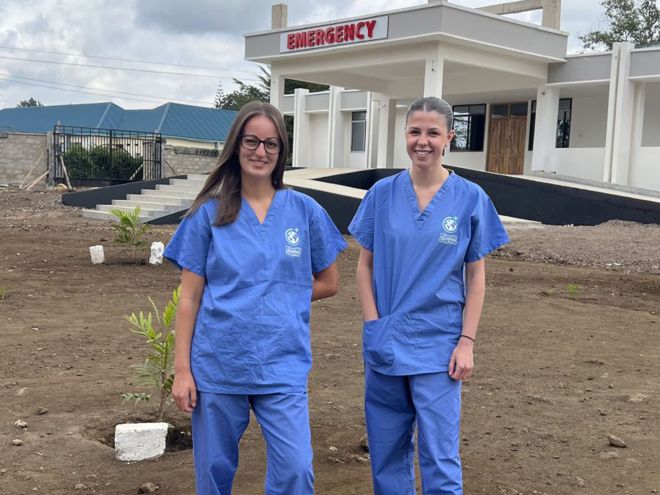 Nursing students Molly Davis and Daisy Lipscombe on placement at Meru District Hospital in TanzaniaIn December, nursing student Janelle Johnson told her story of caring for babies with drug withdrawal symptoms during a placement at a hospital in Mexico. This followed postgraduate nursing students Molly Davis and Daisy Lipscombe working at a hospital in Tanzania, East Africa, for their elective placement. All three nurses were inspired by their experiences to raise funds for vital supplies for the overseas hospitals.

Our Autumn Inspire the Future Campaign came to a close in December, raising more than £46,000 for the Student Hardship Fund, demonstrating the incredible support and generosity of the University's alumni community.